Amitabh Bachchan Is 102 Not Out, Rishi Kapoor Is His 75-Year-Old Son. Details Here

In 102 Not Out, Big B reportedly plays a happy-go-lucky character named Dattaraya Vakharia while Rishi Kapoor features as Babu, who is a sceptic 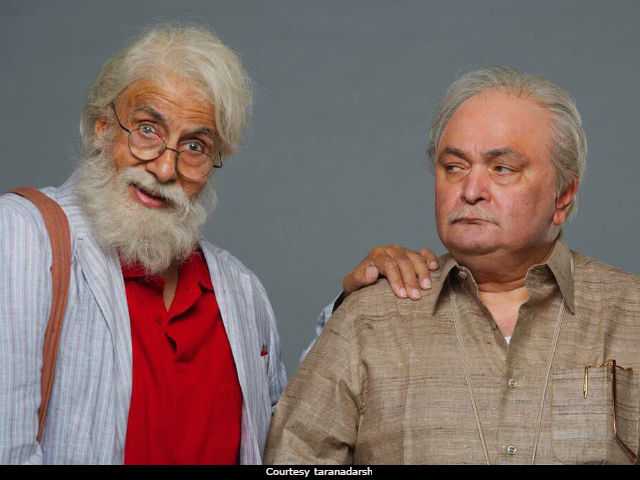 Amitabh Bachchan and Rishi Kapoor will be back on the silver screen after 26 years and their new collaboration is a film titled, 102 Not Out. As the name suggests, it has something to do with the number 102. Is it a cricket score or a house number? No, it's actually the age of Big B's character in the film, who plays father to 75-year-old son to be portrayed by Mr Kapoor. If this is hard to believe, you must witness the first look of the veterans in their 'not out' persona, shared by trade analyst Taran Adarsh. "102 Not Out features Amitabh (Bachchan) as a 102-year-old and Rishi (Kapoor) as his 75-year-old son," Mr Adarsh wrote on Twitter. The film will be helmed by Umesh Shukla, who has already directed Mr Kapoor once in 2015 film All Is Well. 1991's Ajooba, directed by Shashi Kapoor and Gennadiy Vasilev, was the last time Mr Kapoor and Big B shared screen space together.
This will and this should make your day.

#102NotOut features Amitabh as a 102-year-old and Rishi as his 75-year-old son... Based on Saumya Joshi's Gujarati play by the same name.

The first innings of 102 Not Out has already begun, as was revealed by the Kapoor And Sons actor in a tweet on Wednesday. "Wonderful to work again with the legendary Amitabh Bachchan. Thank you Amit ji, it never felt the 26 years old hiatus. We connected instantly!"

The Karz actor had announced his collaboration with Big B with a tweet earlier this month.


Always a pleasure and an honour to work with him. Started reading the script with the team. For further details ,stay tuned!!! pic.twitter.com/ulxQCNUTIU

Rishi Kapoor, 64, and Amitabh Bachchan, 74, have famously co-starred in 1977's Amar Akbar Anthony and 1976's Kabhie Kabhie apart from Naseeb and Ajooba. Rishi Kapoor also featured in a supporting role in Amitabh Bachchan's Coolie. Mr Kapoor, who made many explosive revelations in his autobiography Khullam Khulla, had also opened up about being overshadowed by Amitabh Bachchan in the Seventies and Eighties. "Amitabh is undeniably a superb actor, immensely talented and, at the time, the number one star who ruled the box-office. He was an action hero, the angry young man. So roles were written for him. Although we may have been smaller stars, we were not lesser actors. Yet, the rest of us had to constantly measure up to him," wrote Mr Kapoor.
In 102 Not Out, Big B plays a happy-go-lucky character named Dattaraya Vakharia while Rishi Kapoor features as Babu, who is a sceptic, reported Bollywood Hungama. The movie is actually the screen adaptation of Gujarati playwright Somya Joshi's work, titled 102 Not Out. The Bollywood Hungama report also states that heavy prosthetics will be used for Big B's look as a 102-year-old in the film.
Amitabh Bachchan's Sarkar 3 is currently at the theatres and he has also begun work on Thugs Of Hindostan, co-starring Aamir Khan. Kapoor And Sons remains Rishi Kapoor's last film, in which he played a 90-year-old grandfather.v