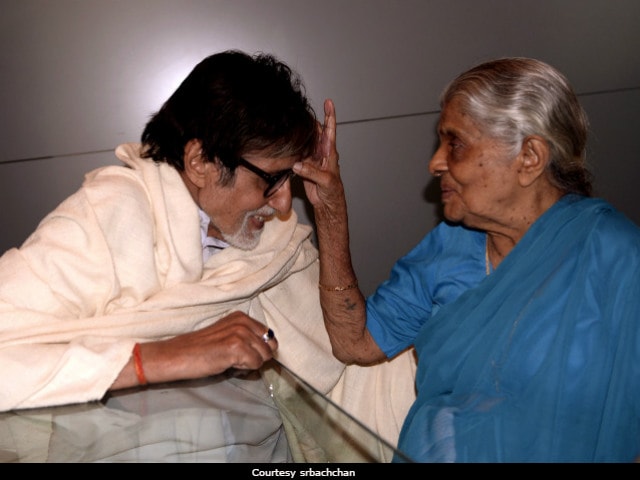 Megastar Amitabh Bachchan keeps fans and followers updated filling in the pages of his official blog with the highlights of his day. One such chapter in his official blog reveals that he recently met a fan of himself, who is 103. Christine Carvalho's dream to meet her favourite superstar came true recently, when she also blessed the 74-year-old star. In his diary, Big B also revealed that while it was an otherwise tiring day for him, the meet was a "special interlude" in the day. "Meeting Christine Carvalho.. who.. hold your breath is 103 years old .. 103 .. !! And sees all my films, a number of times .. had the most ardent desire to meet me .. blessed me on my forehead .. watches Tv every day .. her favourite programme is WWE .. unbelievable .. does her own chores .. bathes on her own, washes her own clothes and just so incredible .. (sic)," reads Mr Bachchan's official blog.
Here's what he tweeted:

It is known that Amitabh Bachchan's Sunday routine includes meeting and greeting his fans outside his Mumbai residence, Jalsa, a recent picture from which was shared by the megastar on Instagram and loved by the world. While meeting his fans, Big B also waved out to his daughter Shweta Nanda Bachchan.


Sunday well wishers .. and the best wave and smile for the daughter SHWETA ..

Meanwhile, Amitabh Bachchan recently took over the big screen in Ram Gopal Varma's Sarkar 3 and is also attending script reading sessions of Thugs Of Hindostan, his film with Aamir Khan. The film releases on Diwali next year. Big B will also co-star with Rishi Kapoor in a film titled 102 Not Out.