Amitabh Bachchan on Living in Kolkata on Salary of Rs 480 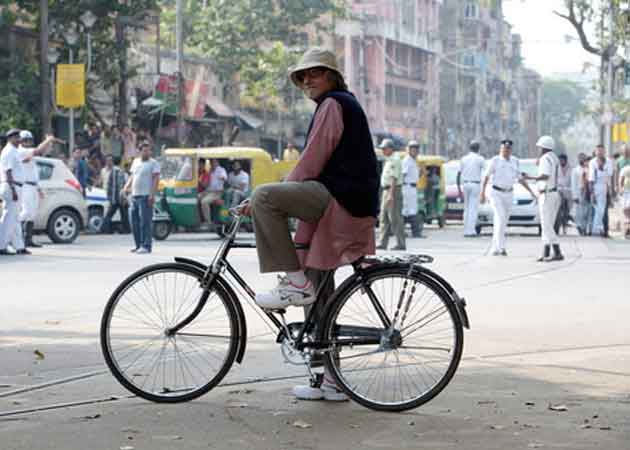 "350 rupees a month gone for bed and lodging, food separate, eating the pani puri or the puchka pani at Victoria Memorial. 2 rupees would fill the stomach thats it and done for the entire day ... looking forward to the free office lunch the next morning!," wrote Big B on his blog

Bollywood actor Amitabh Bachchan, who is shooting for his upcoming film Piku in Kolkata, shared his memories of days spent in the city on his blog.

A nostalgic Big B, who is lodged in the city's Grand Hotel, wrote, "The Grand with its old world charm is quite a contrast to many of the modern that exists in and around the city and the world outside .. it too has its share of many exciting times spent...

The shooting of many films took place in Kolkata and Do Anjaane and Yaarana are among the few ... we stayed here and shot within too .. it is rare to find Hotels that maintain their charm of the old and not succumb to the travails of modernity ... for long this Grand was the grandest in the city where all of Calcutta of the 60's assembled at some time or the other at the Ballroom ... historic days those for the city ... it was the most happening town of the times ... filled with excitement and activity and buzz ... the acting on stage continued from these theatre stages of the more amateur ..."

He also wrote about:

"There were these two groups - The Amateurs and the Calcutta Dramatic Club ... the former filled with the executive boxwala aspirants, the latter more British and white ...

We did ours and they did their's ... but in time we mixed ... and the results were quite improved ... most of my stage acting was done with the Amateurs - Jean Paul Satre Crime Passionale, Death of a Salesman, Virginia Woolf, Waiting for Godot, musicals like The Desert Song, and so many others of eminence ... A Street Car named Desire, where I was in charge of the sound effects and the curtain pulling ... done for the the other ... but those times were exceptional ... finishing office and trudging off straight to rehearsals, meeting all the others spending time with them on and off rehearsal ... "

"Days of inter company games Basketball, Golf, Squash, Cycle Polo introduced by my senior in office Vijay Singh, who I contacted today and shall meet up soon, and the times of the Wooden Spoon, an award for the worst team ... I doubt if we ever earned that, but many known did, and it was done in the spirit of gamesman ship ..."

The concerts he attended

"The concerts we attended - singers from Bombay Film Industry ... Hemant Kumar, Mukesh, Rafi saheb ... playing to large crowds at the maidan, still pretty pristine in condition, and staying up till late night and early morning with them ... the Davis Cup Tennis at the Calcutta Tennis Club and in particular the one against Brazil, which we won ... Ramanathan Krishnan playing exceptional tennis ... the football games and the cricket matches at the Eden Gardens ... Mohun Bagan and Mohammedan Sporting, East Bengal teams ... and the frenzy ... football was professional in Calcutta the earliest ... now of course the ISL has been introduced and we await its results. The Ballygunj Music festival, classical genius at its best ... not having the money to buy the tickets ... waiting till someone left and sneaking in with theirs. Ravi Shankar and Vilayat Khan on sitar in the same night, Allauddin Khan sarod, Allah Rakha on tabla ... such memorable nights."

"Pooja in Bengal is a final treat, nothing like this ever seen before anywhere, the celebrations the local decorations with the bask of the banana tree, the flower arrangements, so innovative and aesthetic, the celebrated bengali aestheticism at its prime."

Surviving on Rs 480 a month

"And then the colleagues and friends and work, little of it, but there, the meagre salary and how we survived with just that, 480 rupees a month! 350 rupees a month gone for bed and lodging, food separate, eating the pani puri or the puchka pani at Victoria Memorial. 2 rupees would fill the stomach thats it and done for the entire day ... looking forward to the free office lunch the next morning!"

"The Sundays spent in anticipation of a win at the Races ... horse Racing at one of the oldest race courses in the country ... and coming out deprived of the little that we had ... speaking about it to my father through letters, of my adventures at the races and he very subtly indicating : 'Beta .. paisa haath mein vo hona chahiye jisme apne khoon paseene ki mehnat dikhai de' (the money in your hand should reflect the money earned through the blood and sweat of your hard work). And the immediate stopping of the visits to the Races"

"And then suddenly one fine day the decision to leave the city and coming home in Delhi to wait and try and attempt the journey to films ... and when that happened, the euphoria soon after for my first visit after the success of Zanjeer and then Deewar ... it was indescribable!! Never seen before and perhaps now shall never be seen for me or by me!! But there is nothing quite like the passion and the presence of the Kolkata crowd, it is beyond description!"

Mr Bachchan also spoke about how life seemed to have come full circle after he ended up in the city to shoot for his film after so many years. He wrote: Life has a peculiar way of its cycling ... it can peddle you out of it and peddle you back

The very streets that I would walk about as a non-entity, nondescript, non plussed, seeking and searching wading through the flood waters of the monsoons, for a suitable job, today I ride my bicycle for PIKU

The Writers Building, the Government House, the Maidan, tram services, Victoria Memorial, Chowringhee, oh, such vivid memories and those ecstatic years of 1962, when Calcutta was the most happening city in the country, what times, the Park Street culture, where a motley collection of restaurants and bars and confectioners, dinner and dance floors all in one sequenced line one after the other and the evenings that were spent each day on those pavements walking form one to the other - Trinca's, Blue Fox, Mogambo, Moulin Rouge, Firpo's, Waldorf ... Flurry's ... the puchka's at Victoria Memorial, the carti kababs at Nizam's and across that exclusive night club the Golden Slipper ending the evening at the Grand Hotel in the ball room and after the midnight ride to DumDum airport, just for a coffee or that extra little.

The tram rides, the tum tum's, chummeries where 8 of us lived in one small room at Clacton Apartments - 10x15 feet crammed but most enjoyable residence ... Esplanade, the Calcutta Swimming Club, for long only for white people, the river side by the Hoogly, and the fascinating 'boar tides' a mountain of a 20' wave that came up from the mouth of the Hoogly where it met the Bay of Bengal travelling miles up the river and past the city until it subsided, the ships and boats breaking anchor and being thrown around in the turbulent waters in its wake.

There was not a single area where we had not changed residence, paying guests at 300 rupees a month, Chowringhee, Tollygunj, Ballygunj, Alipur, New Alipur, Russell Street"

The work places - the office, the learnings of executive kind, postings to the Coal mines for training, shipping and freight broking ... Bird Heilgers, Blacker and Co, Mackinnon Mackenzie, Shaw Wallace, Andrew Yule and so many others ... the executives often being referred to later as 'box walas' ... I could never figure that one out ...

The actor signed off, "It would take a mammoth amount of time to detail everything - the film shootings, the concerts, the events later, right down to the ISL recently, it has been a lifetime."