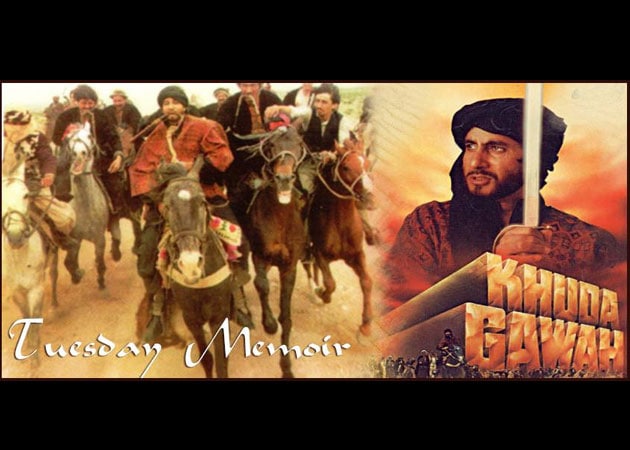 (This picture was posted on Facebook by Amitabh Bachchan)

The rocky wilds of Afghanistan form the setting for the latest installment of Amitabh Bachchan's Tuesday memoir, in which the actor writes about shooting for the Manmohan Desai-produced Khuda Gawah in and around the shrine-city of Mazar-e-Sharif.

The rocky wilds of Afghanistan form the setting for the latest installment of Amitabh Bachchan's Tuesday memoir, in which the actor writes about shooting for the Manmohan Desai-produced Khuda Gawah in and around the shrine-city of Mazar-e-Sharif. Khuda Gawah, directed by Mukul Anand, starred Amitabh Bachchan, Sridevi (in a double role), Danny Denzongpa, Nagarjuna and Shilpa Shirodkar.
It was, as Mr Bachchan writes on Facebook, "extremely troubled times" but the small delegation from Bollywood were welcomed with open arms.
He says: "The Soviets had just left the country and power handed over to Najibullah Ahmadzai who was a die-hard fan of popular Hindi cinema. He wanted to meet me and we were given right royal treatment. We were treated as VVIP state guests at Mazare-e-Sharif and taken through the length and breadth of the incredibly beautiful country in airplanes with armed escorts. We received the traditional warmth of the locals who have passion of hospitality. We weren't allowed to stay in hotel... a family just vacated its home for us and moved to a smaller house."
Afghanistan, with a rising political temperature, was then a nation on the cusp but it was also a land of incredible beauty and atmosphere.
Big B writes: "There were security problems, of course, with tanks and armed soldiers all over the streets. Still, it's been the most memorable trip of my lifetime. The unit was invited by a group of warlords, Danny Dengzongpa, Biloo, Mukul and I boarded a chopper gunship, flanked by five other helicopters. It was an unforgettable ride. The aerial view offered us the vista of purple mountains turning pink and red because of poppies growing there. Time seemed to have stood absolutely still in the valley where the chopper landed.
"We could see a medieval castle-like structure in the distance. We were bodily lifted by the warlords and carried there because traditionally, the feet of guest aren't supposed to touch the ground. From the castle we went to grounds where the Buzkashi tournament had been organized for us. Colourful tents had been set up, I thought I was in Ivanhoe land. The warlords insisted that the four of us spend the night there, the palace was emptied and the four of us kept eating and drinking and looking as if we'd wandered into an unbelievable fairy tale.
"We were smothered with gifts. In Kabul, the night before we flew back to India, Najab called us to president's residence and decorated all of us with the 'order of Afghanistan'. That evening his uncle sang an Indian raga for us with impeccable ease. I don't know where our hosts are, I often wonder where they are today."
Mr Bachchan may well wonder. Najibullah Ahmadzai was President of Afghanistan from 1987 to 1992, his government imploding with the death of Soviet Russia which had been providing him aid. In September 1996, he was tortured and executed by the Taliban who had overrun Afghanistan by then. In the years since Mr Bachchan visited till the Taliban took over, Afghanistan was shattered by a civil war waged by the mujahideen, led mainly by the local warlords.