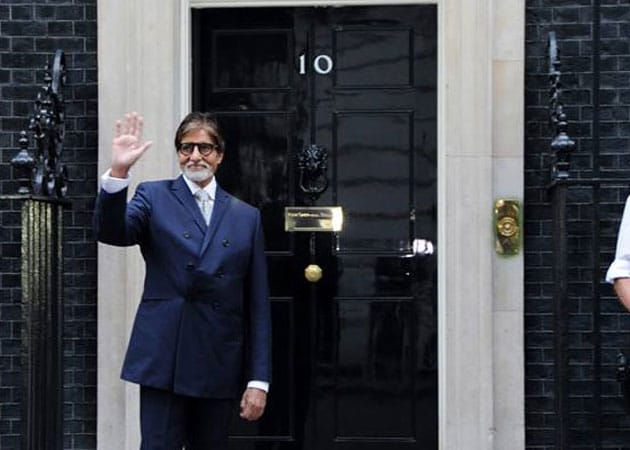 Big B 10 poses outside 10 Downing Street.

Bollywood megastar Amitabh Bachchan has been honoured with the Global Diversity Award 2013 at the State Room of Britain's House of Commons here.

Bollywood megastar Amitabh Bachchan has been honoured with the Global Diversity Award 2013 at the State Room of Britain's House of Commons here.
Speaker of the House of Commons, Rt Hon John Bercow MP presented the ornately sculpted glass Award to the 71-year-old actor describing him as "a Bollywood icon and the most famous Indian film star of all time."
Describing Mr Bachchan as a role model, Speaker Bercow said, "You have been a role model and Amitabh you deserve the award." British actor Hugh Grant was present at the award ceremony which was chaired by Rt Hon Keith Vaz, MP, Chairman, Home Affairs Select Committee.
The citation noted that "Amitabh Bachchan first gained popularity in the early 1970s as the 'angry young man' of Hindi cinema, and has since appeared in over 180 Indian films in a career spanning more than four decades. Amitabh Bachchan is regarded as one of the greatest and most influential actors in the history of Indian cinema."
"He is a Global patron for the diabetes charity Silver Star and last year was presented with a Mobile Diabetes Unit for his home city Mumbai named 'Amitabh' in his honour," the citation said.
Receiving the award, Mr Bachchan said he was overwhelmed to receive the "extremely historic award." "I have been extremely overwhelmed by the love and affection of the people of Great Britain," and thanked his parents and family for their support in achieving what he did. He said when Keith Vaz introduced him to the Diabetes awareness campaign, "It has been a great privilege and honour to visit various cities in helping people to tackle diabetes."
The actor thanked Vaz for naming one of the Mobile Diabetes Units in his name in Mumbai and welcomed the announcement to start yet another mobile unit in Delhi, named after his father Harvanshrai Bachchan.
"My father taught English in Allahabad University and in 1952 he was the first Indian to get a Doctorate in English Language at the Cambridge. He completed his Doctorate in two years instead of the normal 4 years."
Referring to Bollywood, he said, "There are very few institutions which can boast of such unity as the Film industry."
Asked about his future plans, Mr Bachchan said, "I just did a film called Satyagraha which dealt with socio-political issues. There are several other films in the pipeline including Bhootnath 2. I am also currently busy with the latest Hindi version of Who wants to become a Millionaire.
In his brief address, actor Hugh Grant said, "It is truly a great pleasure meeting Amitabh Bachchan. He is a gigantic actor, super star who is hugely popular. He is also like a saint in some way because of his charity and animal welfare work. If ever anyone who deserves the Global Diversity Award, it is Amitabh Bachchan. Congratulations.