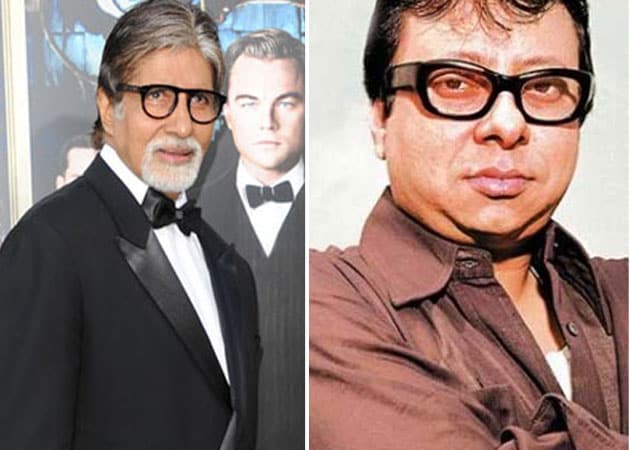 Megastar Amitabh Bachchan remembers the legendary Rahul Dev Burman, affectionately called Pancham da, on the occasion of his 74th birth anniversary on Thursday and says "his last years were filled with sadness".
"He felt the industry had discarded his talent and was not giving him the opportunity he wanted," the 70-year-old posted on his blog on Thursday night.
Pancham revolutionised Hindi film music since he debuted as a composer with comedian Mehmood's 1961 movie Chote Nawab. He was probably the only composer who could play all the musical instruments available during that time.
Pancham's range varied from the catchy Aaja aaja, main hun pyaar tera from Teesri Manzil to the soulful thumri Hame tumse pyar kitna, ye hum nahin jaante by Parveen Sultana in Kudrat. He also composed mischievous number Ek chatur naar, badi hoshiyar from Padosan and the melodious Tere bina zindagi se koi shikwa to nahin from Aandhi.
Burman's last work was seen in 1942: A Love Story, which was released after his unfortunate demise in 1994.
"His last known work was in the film 1942: A Love Story, the film made by (Vidhu) Vinod Chopra starring Anil Kapoor and Manisha Koirala. The songs were written by Javed saheb (Javed Akhtar), and it was considered to be one of the best music tracks of RD Burman."
"He passed away suddenly, leaving behind a history of wonderful memories and his music, which shall always remain eternal," reminisced Big B.
Even so many years after Pancham's death, he rules the hearts of millions as his hits continue to rule the Hindi chartbusters.
"Pancham is the name given to a note in the music world, and because he used to sing in that high pitch, he was nicknamed Pancham. Son of the legendary Sachin Dev Burman, another music maestro of the industry, Pancham brought in the colour of modern sound and form in the industry laden till then with a bent towards the more classic," wrote Mr Bachchan, highlighting the late composer's USP.
Apart from his inherent talent, he was great company too, said Big B.
"Always affable, filled with humour, and having a ready story on a comic situation that he may have encountered. Spending time with him in his music room, where each evening he would sit with his musicians and compose, was a delight," he said.