Amitabh Bachchan Plans to Spend Some Time With Aaradhya on Birthday 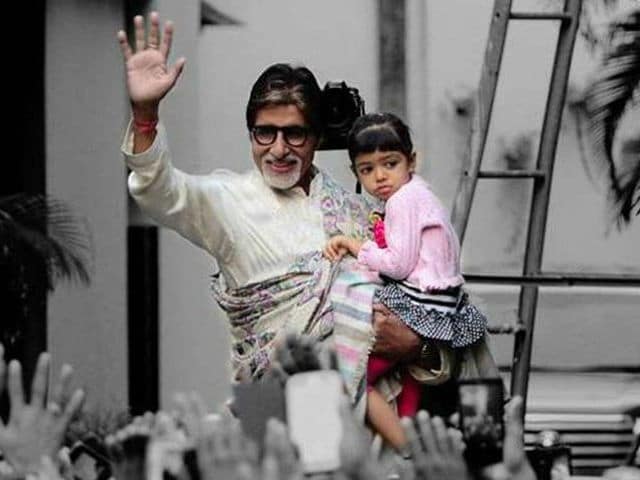 Bollywood actor Amitabh Bachchan addressed the media on his 74th birthday at his Mumbai residence. The actor, dressed in a kurta, talked about his family, upcoming projects, hobbies, co-stars, choice of films and more.
Mr Bachchan reveals his four-year-old granddaughter Aaradhya wished with the rest of the family at 12 am. "Aaradhya wished me with the rest of the family. Once I get free with the conference I will spend some time with her."
This year Amitabh Bachchan's birthday coincides with Vijay Dashmi (Dussehra). Vijay is one of Big B's iconic screen names and the actor says it's just a coincidence. "Salim Javed saab gave me this name first in Zanjeer."
The actor was asked what is new this year and he has a philosophical reply: "saans le rahe hai yahi naya hai. I hope to get new challenges in life so that we can work with excellence."
Actor, singer, producer, entrepreneur and now a social media star - what's next for Amitabh Bachchan?
"I don't go looking for feathers. They just come way and I work with them to the best of my abilities. I hope that there are challenges in the future. I hope that there are people who challenge me with new projects and ideas," replied Big B.
Which is Mr Bachchan's favouite role? "All roles are close to me. Whichever films I've done, whatever roles I do and with whoever I've worked are all very close to me and I respect them all. To choose one would disrespect the others," he said.
Mr Bachchan's latest film Pink was praised by critics and cine-goers alike. When asked if he'd like to do a film like Pink again, Big B said: "Actors don't work with the thought that if a film would have an impact on the society or not. When a producer brings a role, we as actors take a look at that and decide on the basis of script. If it goes on to have a social impact then it definitely makes us happy."
Amitabh Bachchan shares his date of birth with veteran actors Dilip Kumar and Siara Banu's marriage anniversary and the actor says he's already wished them.
Mr Bachchan, who is one of the busiest actors in Bollywood, also said that he wants to learn musical instruments and languages. "I have all the instruments at home and I hope to learn them."
On the social media platforms - Facebook and Twitter - Big B thanked his fans and well-wishers early in the morning:


T 2405 - To them that bring all the love and wishes for the birthday .. folded hands in gratitude .. !! pic.twitter.com/q7HE9PgVLf

Amitabh Bachchan, now 74, has no plans to slow down or stop. One of his upcoming films is Thugs of Hindostan with Aamir Khan. The film is produced by Yash Raj Films. He has also been roped in for an important role in Ayan Mukerji's superhero film, tentatively titled Dragon, which stars Ranbir Kapoor and Alia Bhatt.