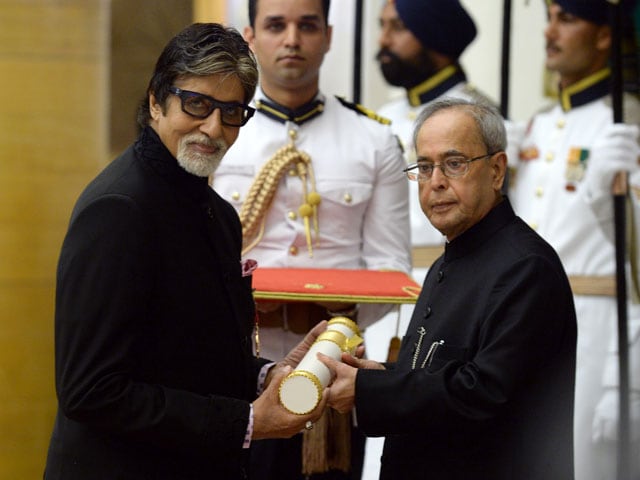 Mr Bachchan received the Padma Shri in 1984 and the Padma Bhushan in 2001.

Actor Amitabh Bachchan, dressed in a black bandhgala, received his Padma Vibhushan award from President Pranab Mukherjee in New Delhi on April 8. Mr Bachchan's son and daughter, Abhishek and Shweta, and daughter-in-law Aishwarya attended the ceremony.
Before the ceremony began, senior Ministers like Rajnath Singh, Arun Jaitley and Ravi Shankar Prasad greeted the 72-year-old actor. As received his award from the President, Mr Bachchan was applauded by an audience that included Union Ministers, top civil and defence officials and the families of 50 prominent personalities who were given their Padma awards on April 8. 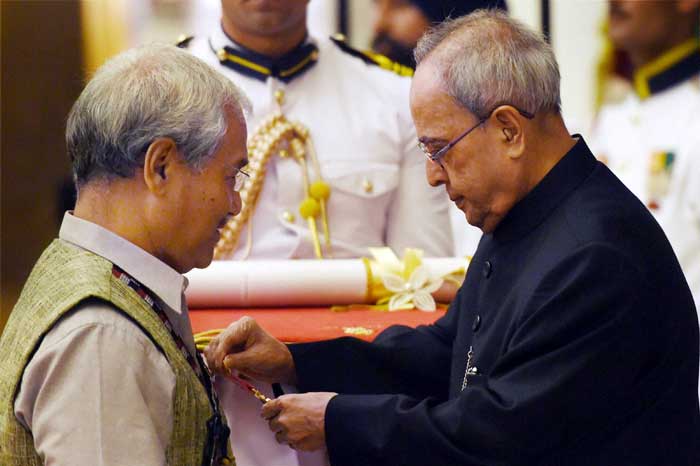 The Bachchans were mobbed at the customary tea party hosted by the President. However, the Rashtrapati Bhavan guards helped keep the crowd and journalists at bay.
Mr Bachchan, star of film such as Sholay, Deewar, Don, Amar Akbar Anthony, Black and Paa, received the Padma Shri in 1984 and the Padma Bhushan in 2001. He was last seen in this year's Shamitabh and also stars in the upcoming films Piku and Wazir.
On April 7, Mr Bachchan tweeted about attending rehearsals for today's award ceremony:

Mr Bachchan's Shakti co-star Dilip Kumar, who has been unwell for months, was unable to collect his Padma Vibhushan in person. Assamese filmmaker Jahnu Barua received his Padma Bhushan.

@Amirmurt@TheDilipKumar he is unwell and shall not be there to receive his award ... sad

The Padma honours are given out in two batches every year. Mr Bachchan's Bollywood colleagues Sanjay Leela Bhansali and Prasoon Joshi received their Padma Shri awards on March 30.