Amitabh Bachchan: The Age of Grandchildren is a Lovely Phase 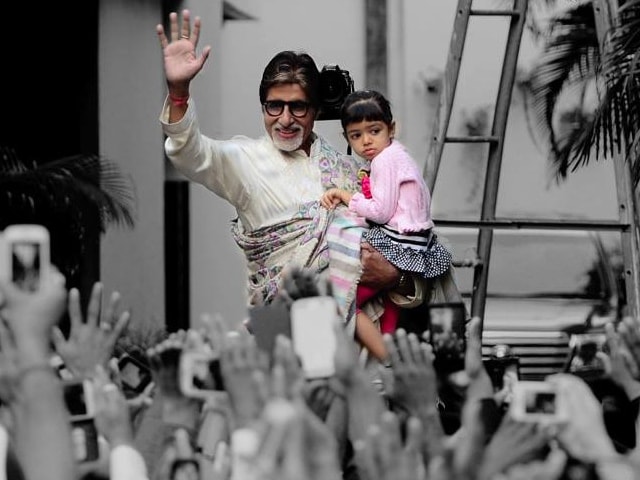 Big B with his granddaughter Aaradhya. This image was posted on Facebook by Amitabh Bachchan

"We pass the age of youth, study, university, girls, marriage, wife, children. Now is the age of grandchildren," says Big B

Megastar Amitabh Bachchan says he is relishing the "lovely" phase of being able to spend time with his grandchildren.
Mr Bachchan, who has three grandchildren - Aaradhya, Navya Naveli and Agastya - will be seen in the role of a superhero in the upcoming animated TV series Astra Force.
"When you are 73 these are the kind of people you meet. You meet kids, they are the happiest persons. We pass the age of youth, study, university, girls, marriage, wife, children. Now is the age of grandchildren," Big B told PTI.
"It is a lovely phase, a lot of people say the best phase of an individual's life is when he spends time with grandchildren. I will endorse that. Therefore this (playing superhero 'Astra') fitted into my mind," he added.
In Astra Force, the Piku star plays a grandfather with great powers and strength.
"There are two children (in the show) who are twins and they are like my grandchildren. I love being in their company," he said.
Aaradhya has not yet seen the picture of his grandfather as an animated hero.
"She has not seen yet. It is too early to show her," he said.
Mr Bachchan revealed that Aaradhya has her set of favourite cartoons, but he is not aware of them.
"I don't know (about her favourite cartoon) as she goes so rapidly on iPad watching them that it is difficult to catch up. But it (superhero Astra to be played by him) will be a great incentive for her to have her lunch, dinner, breakfast, because unless she sees something on television she won't eat anything," he said.
"It is becoming a universal practice with all kids. She likes to see all these cartoons and hopefully we will come soon with it (Astra Force series)," he said.
Whenever Aaradhya sees her grandfather on the big screen, she is happy about it.
"She sees visuals sometimes. She is happy about it. I remember when I was a kid, I used to see Superman, Batman. I feel some things you imbibe they remain with you throughout your life," the veteran actor said.