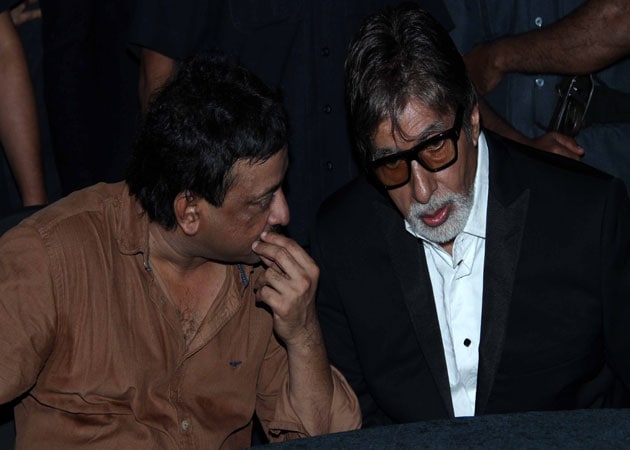 Big B and Ram Gopal Varma have worked together in Sarkar, Sarkar Raj and Department

After barbs, megastar Amitabh Bachchan received praise from filmmaker Ram Gopal Varma (RGV) who credited Big B for his entry into filmdom.

After barbs, megastar Amitabh Bachchan received praise from filmmaker Ram Gopal Varma (RGV) who credited Big B for his entry into filmdom.
Big B and RGV worked together in films like Sarkar, Sarkar Raj, Ram Gopal Varma Ki Aag, Department and Nishabd.
But relations between the two soured when RGV posted some negative comments on Big B's performance in 2011 movie Bbuddah... Hoga Terra Baap.
On Sunday Varma tried to patch up by inviting the megastar to the launch of his movie Satya 2 and Big B obliged him.
On his blog Big B mentioned his visit to the event and even uploaded pictures.
"...a quick visit to a 'party' organised by Ram Gopal Verma, which has to be historic in concept because he never goes to one and never gives one ... but he wanted me to be present for the introduction of his new film Satya 2," Big B posted.
"Ramu in the meanwhile chose the occasion to give a history of his reason to enter films and credited it to me. Which was quite a moment as can be seen in the pictures," he added.
Satya 2 stars newcomers Puneet Singh, Anaika Soti and Aradhna.