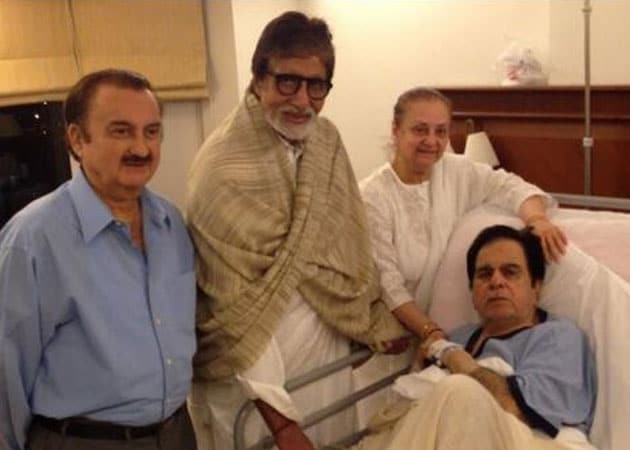 Dilip Kumar, who is recovering from heart attack in Mumbai's Lilavati Hospital, had a celebrity visitor in the form of friend, admirer and co-star Amitabh Bachchan on Monday (September 23, 2013).

Dilip Kumar, who is recovering from heart attack in Mumbai's Lilavati Hospital, had a celebrity visitor in the form of friend, admirer and co-star Amitabh Bachchan on Monday (September 23, 2013).
"Out of the ICU, it's good to be in the hospital suite and have @SrBachchan as a visitor," Dilip saab posted on Twitter along with a picture of himself with the actor, wife Saira Banu and brother-in-law Sultan Ahmed.
"Mr. Bachchan came to meet Dilip Kumar today around 7 pm. They chatted for around half an hour. As far as Dilip Kumar's health is concerned he is absolutely fine and he now desperately wants to go back home," Udaya Tara Nayar, Dilip Kumar's close friend, told news agency IANS.
Soon after the visit, Mr Bachchan wrote on his blog about the visit. "I had never met him so ... in bed, in hospital, ailing and troubled and harassed by all the medical fuss around him .. Dilip Kumar !! the great thespian, the wonder of Indian cinema, the ultimate performer in my eyes, lying there in Lilavati Hospital, recovering from a recent mild heart attack!" Big B wrote.
"He seemed cheerful .. at least when he saw me ... Saira ji warned me that he had been quite irritable and non cooperative throughout the day, and so to excuse any kind of untoward behaviour that he may dole out to me ... but he was gracious and kind .. repeatedly he kept saying 'wah<' 'wah' and then slipping into repetitions of Allah," Mr Bachchan added.
On September 20, Mr Bachchan had posted on Facebook that he would visit the actor in the hospital. "Dilip Kumar Saheb remains stable and well. Am in touch with Saira ji. Shall be visiting him in Hospital, as soon as he is allowed visitors .. our prayers and duas for his speedy recovery," Big B wrote.
Amitabh Bachchan considers Dilip saab as his inspiration in Bollywood. The two actors had worked together in the 1982 film Shakti. They were last seen shooting together for the Filmfare magazine's April edition celebrating 100 years of Indian cinema.
"He has been an inspiration not just for me but I am certain to thousands of those that have ever dreamt of facing a camera for the art form called cinema. His presence his aura and his dedication to film shall be documented as 'before Dilip Kumar and after Dilip Kumar'," Mr Bachchan had once written in his blog.
Dilip Kumar, 90, who has been in ICU since he was hospitalised on September 15, was shifted to the general ward on Sunday (September 22, 2013).
The actor may be discharged from hospital in a couple of days, sources indicated.
(With IANS inputs)