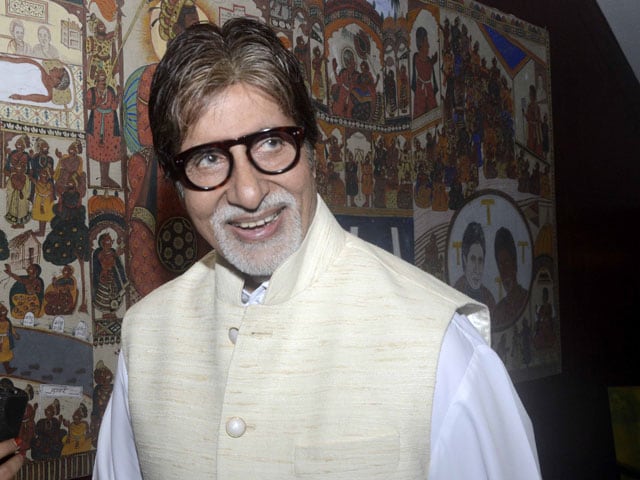 Amitabh Bachchan photographed at an event in Mumbai.

"The streets are filled with the voice of human commemoration. The lively banter of speech and hilarity, of the presence of the entire family all together, perhaps this once in an entire year, of gifts and happiness," said Mr Bachchan

Megastar Amitabh Bachchan said that faith motivates human beings more than anything else.
This is what Mr Bachchan wrote on his official blog:
Faith must have been and still is the most motivating unseen force within the universe of the human. How else can one explain its power of presence, at every corner of our life," wrote Mr Bachchan.
Regarding Ganesh Chaturthi celebrations in Mumbai, he said: "The spirit of devotion and celebration has never been so pronounced and voluble as in our part of the world. The sounds of dance and drum, of smiling happy faces, young and old, of the pride in carrying each their homed Ganapati, now ready to be put away where each year it belongs."(Also Read: Happy Ganesh Chaturthi, Say Amitabh Bachchan, Sridevi, Madhuri)
"The streets are filled with the voice of human commemoration. The lively banter of speech and hilarity, of the presence of the entire family all together, perhaps this once in an entire year, of gifts and happiness and abandon traits, they that are denied this in normal existence, relishing as though it would perhaps not return," said Mr Bachchan.
"They move with a pride of possession - the possession of God, nurtured, decorated and looked after, it is their day, they own the town, the journey to the waters, the preferential command over the traffic," he added.
However, Mr Bachchan said that the feeling of Ganesh Chaturthi is not the same due to technological advancements.
"Now perhaps with modern communication, the distance and thedepart may not have similar feel. Skyped and FaceTimed, smsed and Twittered, FaceBooked and WhatsApped. There is little that can keep two people apart from each other for long," said Mr Bachchan.
"He, the God, the Maker, took various celestial shapes and sizes and stories of belief among us and still does, but would there be in time, when perhaps He would be replaced, by what he created to challenge the creator," he added.