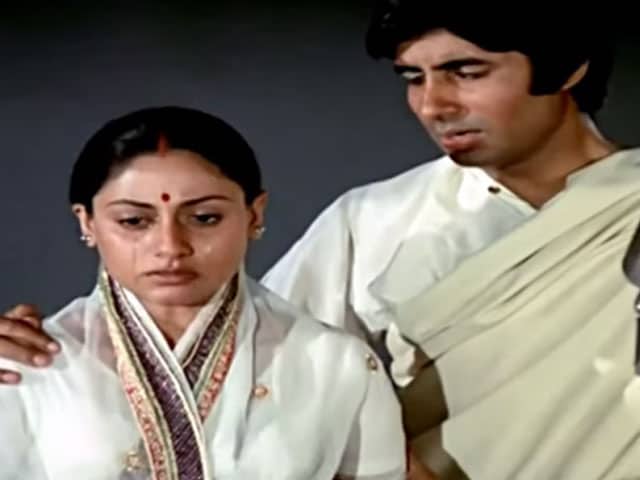 A still from Abhimaan

It's been 42 years since actor Amitabh Bachchan's Abhimaan released on July 27, 1973.
Abhimaan, which was directed by Hrishikesh Mukherjee , co-starred Mr Bachchan's wife Jaya. The Bachchans had been married a few weeks when Abhimaan released.
Mr Bachchan, now 72, posted a few images from the movie on Facebook:

On his official blog, the actor shared anecdotes of his experience of filming Abhimaan with his 'Godfather Hrishi Da' and then newlywed wife:
"There is the completion of several years of Abhimaan , a most poignant film with some of the most haunting music by the maestro and genius SD Burman, the Father of RD Burman , and the most delicate handling by Hrishi Da, Hrishikesh Mukherjee, the director with whom I have worked in the maximum films of my career; and one whom Jaya and I referred to our Godfather in the Industry - he being the first person after our parents that we informed of our decision to get married; him and KA Abbas, who gave me my first break into the film Industry ," he wrote.
"Abhimaan, the wonderful moments spent during the making of this everlasting story and film. It was made under the understanding of AMIYA, a production house both Jaya and I set up very early in our career. A production which we gave over to our respective secretaries to run, who then took claim over it and which has remained that way till date. Sad, but that has been the results of many creative inputs of artists never getting any rights for the future, in ventures where they have made the contribution but never been given commercial right," he added.
Abhimaan cast the Bachchans as talented singers Subir and Uma, who fall in love and get married only to later be driven apart by professional rivalry.
Meanwhile, the Piku star will next be seen in Bejoy Nambiar's Wazir, which also features Farhan Akhtar.