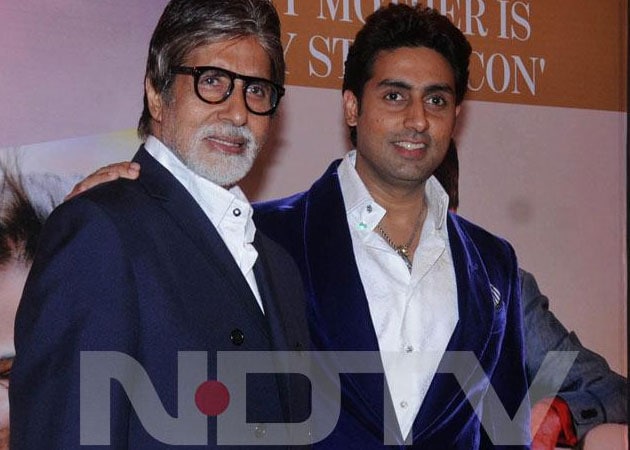 Big B and Abhishek watched action movies and a soccer match

Megastar Amitabh Bachchan says he celebrated his 41st wedding anniversary watching "action movies" and a soccer match with son Abhishek. (Also Read: On 41st Wedding Anniversary, Amitabh Bachchan Dedicates Blog to "All Wives")
Big B and Jaya were married on June 3, 1973, and they have two children - son Abhishek and daughter Shweta. While Abhishek is married to actress Aishwarya Rai and they have a daughter named Aaradhya, Shweta is married to businessman Nikhil Nanda and has a son Agastya and daughter Navya Naveli.
"A flood of wishes on our 41st! So grateful to all. Wife is away, but father and son had a boys' night out. Football (sic)," the 71-year-old tweeted.
Big B further revealed on his blog that chilling at home was his decision.
"The boys were having a night out. Abhishek and I. The anniversary behind us he wished we go out to a movie, or dinner. I insisted we chill at home, so we chatted and exchanged notes and saw two movies back to back. Cool!
"Yaa, you guessed right, action movies! And when that was over back to our pastime - Football and watching the runup to the World Cup," he wrote on his blog.
Big B, who has worked with wife Jaya in films such as Zanjeer, Abhimaan, Chupke Chupke, Sholay, Silsila and Kabhi Khushi Kabhie Gham, also thanked his family for their blessings on the special day.
"Blessings from elders, from family and the extended family makes the day delightful and comfortable, even though the wife is out of the country. 41 years! It has been a while has it not in the life of an individual," he said.
He also said, "It does not matter whether we are together on the day of the anniversary, what is important is our report card, that should be happy and satisfactory."
"Our report card does not deal with numbers and comment, it merely emphasises the reports of our progeny - Shweta and Abhishek. They are our numbers, standings, rankings, marks, whatever! They be right we all are right," he said.