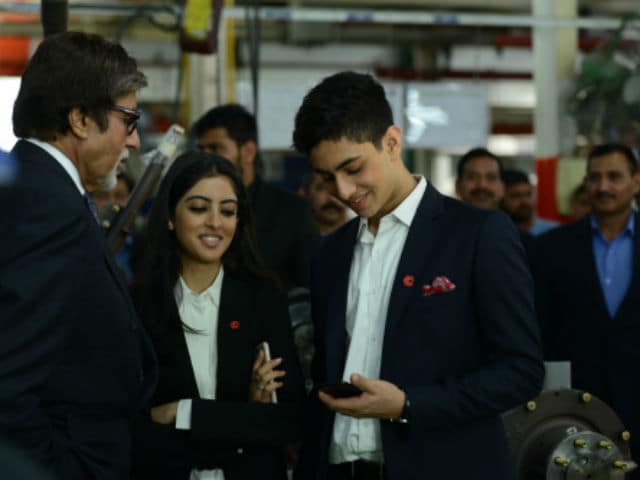 Megastar Amitabh Bachchan's love and support for his family is no secret. He very well knows how to maintain a balance his professional and personal life. Mr Bachchan is always seen by his family's side during special occasions. The 74-year-old actor recently visited Delhi to 'work' at his son-in-law Nikhil Nanda's factory and to spend time with his grandchildren Navya Naveli Nanda and Agastya Nanda. Mr Bachchan on Twitter wrote, "To Delhi in the morning to work at son in law's factory and to be with the apples of my heart .. my grandchildren !!(sic). The actor, who is also an avid social media buff shared pictures of his with Navya and Agastya. A couple of months ago, the doting grandfather's hand-written letter to Navya and Aaradhya, Aishwarya and Abhishek Bachchan's daughter had gone viral.
Here's what Big B posted about spending time with Navya and Agastya:


T 2485 - To Delhi in the morning to work at son in law's factory and to be with the apples of my heart .. my grandchildren !! pic.twitter.com/EUijqXKW5W

In his blog, the actor has revealed that he shot a promotional film for Nikhil Nanda's company and his joy of being with Navya and Agastya. He wrote, "My love and .. such a joy to be with the grandchildren..Goodness it was just the other day I was rushing their Mother to the Breach Candy Hospital for their deliveries and now this."
Meanwhile, Mr Bachchan was last seen in Aniruddha Roy Chowdhury's Pink. He won Star Screen Best Actor Award for his role as a lawyer Deepak, who came out of retirement to help three young women facing the difficult situation. The actor will now be seen Ram Gopal Varma's Sarkar 3. The film will release in March next year.