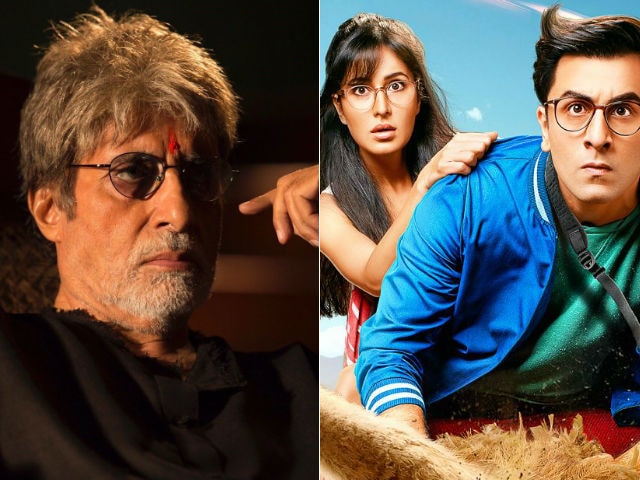 Ready or not, here comes another mega Bollywood clash. Yesterday, it was revealed that Amitabh Bachchan's new film Sarkar 3 will release on April 7, a date already booked by Ranbir Kapoor's Jagga Jasoos. Sarkar 3, film number three in director Ram Gopal Varma's acclaimed political drama series, has been rescheduled from its original release date in March - the postponement will take it head to head with Jagga Jasoos, co-starring Katrina Kaif - a film that has been long in the making and much delayed. After being shelved temporarily, the Anurag Basu-directed Jagga Jasoos was resurrected and posters and a trailer released some months ago to much excitement. It will have to share screens with Sarkar 3, as director RGV revealed in a tweet:

The two films couldn't be more different - Sarkar 3 is a crime drama with political undertones and stars Mr Bachchan in the title role of Subhash Nagre who is known as Sarkar; Ranbir plays a teen detective in Jagga Jasoos, the treatment of which is far lighter and features its two leads capering across the African savannah on ostrich-back in one memorable shot. The additional cast of Sarkar 3 includes Manoj Bajpayee, Jackie Shroff and Yami Gautam. Jagga Jasoos also stars Adah Sharma, Sayani Gupta and Saswata Chatterjee returning to Hindi cinema after playing Kahaani's Bob Biswas as detective Jagga's missing father.
Sarkar 3's vacating of its March slot benefits Begum Jaan, starring Vidya Balan and Naseeruddin Shah, which will have the box office to itself on March 17.
Showdowns between movies are almost always heralded by intensely breathless headlines and trailed by close scrutiny of the earnings. 2017 began with two big films releasing ahead of the extended Republic Day weekend - Shah Rukh Khan's Raees and Hrithik Roshan's Kaabil. While the box office has not prostrated itself in supplication before either, SRK's movie has made much more than Hrithik's. At last count, Raees had made Rs 1.24 core and Kaabil had earned Rs 80 crore.
As of now, 2017 will see at least a couple more clashes - between Meri Pyaari Bindu and Half Girlfriend in May, Sanjay Dutt's comeback Bhoomi and Aamir Khan production Secret Superstar in August, and Aankhen 2 and Golmaal Again in October.