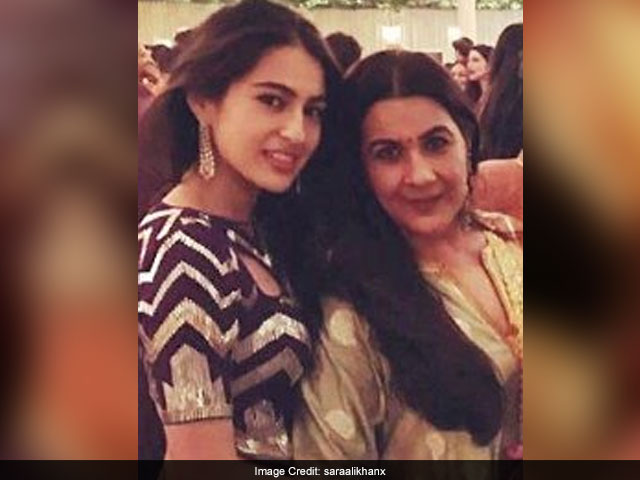 Actress Amrita Singh has refused to let her daughter Sara Ali Khan wear a bikini on screen, claims a report in DNA. Aspiring actress Sara, 24, is the daughter of Amrita Singh and her ex-husband Saif Ali Khan. They divorced in 2004 and Saif is now married to Kareena Kapoor. Sara is supposedly going to be launched in a Karan Johar production and rumour has it that her debut film includes three bikini scenes. Sara's grandmother Sharmila Tagore and aunt Soha Ali Khan have worn bikinis in their films, so has Kareena in Tashan and Kambakkht Ishq - Amrita Singh hasn't and doesn't want Sara to either, the DNA report claims.
"Once she heard the scenes, Amrita said no as she feels that she's not a part of the Pataudis after her divorce from Saif Ali Khan. His mother Sharmila Tagore had worn a bikini in her film An Evening In Paris (1967). Saif's sister Soha too donned a bikini in her film Mr Joe B Carvalho (2014) and his wife Kareena Kapoor has worn them in her films. Amrita wants her daughter to be like her and not the Pataudis. Producer Karan Johar is keen on getting the bikini scenes out of the film hence the delay in announcing the cast of SOTY 2. Amrita wants Sara to be known for more her acting chops than her body," DNA quoted a source as saying.
Interest in Sara Ali Khan has been high ever since she made an appearance at an Ambani soiree some years ago. She was then studying at Columbia University in USA. Later, she was reported to have been approached for a film - this was shot down by Ms Singh who clarified it was she who was in talks for a role and not her daughter. Now, it seems that Sara Ali Khan is finally ready for the spotlight.
Amrita Singh is the star of films like Mard, Chameli Ki Shaadi, Raju Ban Gaya Gentleman and Aaina. She had a pivotal role in 2014 hit 2 States. Saif Ali Khan was recently seen in Rangoon.