Pulkit Samrat was photographed outside a family court in Mumbai, where he and estranged wife Shweta Rohira filed for divorce Pulkit Samrat was photographed outside a family court in Mumbai. Image courtesy: @GR8_Stars

Bollywood actor Pulkit Samrat got into a scuffle with a photographer yesterday after he filed for divorce. Pulkit, 33, and his estranged wife Shweta Rohira went to file for divorce yesterday afternoon in Bandra family court. But things turned ugly when Pulkit got into a scuffle with a photographer. In some photographs, the actor is seen grabbing a photographer by his collar. Apparently Pulkit lost his cool when he saw photographers taking his pictures while he was leaving from the court.
Pulkit was apparently enraged when he spotted photographers outside, reports news agency PTI. Pictures of him attacking a photographer have been circulating online. The actor reportedly yelled at the waiting lensmen demanding to know who told them that he was going to be at the court. Shweta Rohira and Pulkit Samrat separated in 2015 amid reports that the Fukrey actor was dating Yami Gautam, with whom he co-starred in films like Sanam Re and Junooniyat.


Actor #PulkitSamrat grapples with a photojournalist outside the family court post hearing of his divorce case with #ShwetaRohirapic.twitter.com/XZAYXQHFUM

Here are more pictures of Pulkit outside the court: 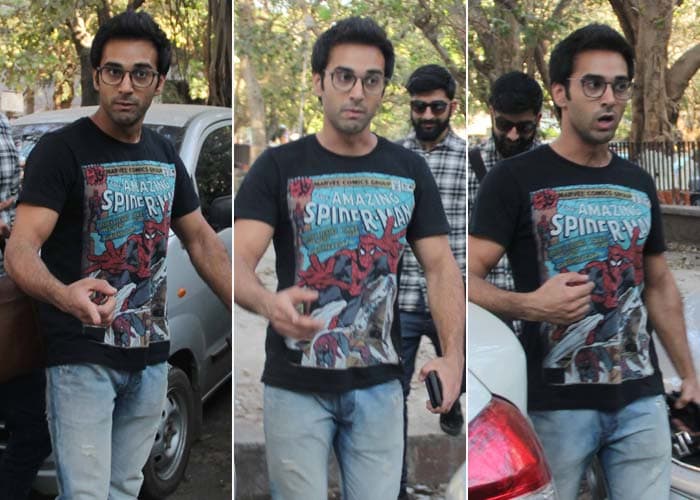 Shweta was spotted leaving the premises of the court dressed simply in white and denims. Shweta Rohira, who is very close to Salman Khan, and Pulkit Samrat married in 2014, though Shweta later claimed that this was just the official wedding and that they really married many years earlier. In July last year, Shweta blamed Yami Gautam for the end of her relationship with Pulkit, telling mid-day.com : "Yes, Yami broke my marriage. I have finally come out of my illusion; so many people cannot lie. Everything was fine between us until one person came in between.". Pulkit defended Yami, saying she should not be "blamed" for the split. He told news agency PTI: "Yami is a nice girl. It is foolish to hold someone else responsible for my relationship's failure and make that thing overshadow the hard work that the person is doing. If there is something that has worked for me or has not worked for me in my personal life, then it is because I was at fault somewhere and may be the other person was at fault. There can never be a third person affecting the two of us."
Shweta, who considers Salman Khan her 'rakhi brother,' is reportedly prepping for her debut in Bollywood. Meanwhile, Pulkit Samrat was last seen in 2016's Junooniyat.
Yami Gautam's new film Kaabil stars Hrithik Roshan and releases on Wednesday.
(With inputs from PTI)