Anil Kapoor Is Too Thrilled To Meet Himself. Double Jhakaas 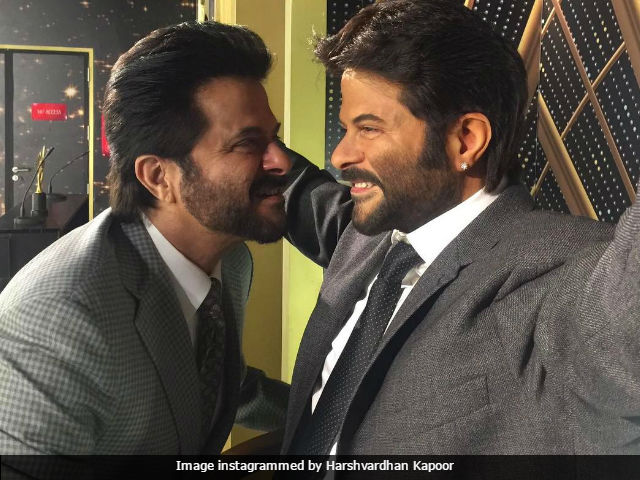 Actor Anil Kapoor's wax statue was recently unveiled at Madame Tussauds' Singapore chapter. The 60-year-old actor was in the city when the statue was unveiled and he looked super excited. Anil Kapoor's wax statue depicts a scene from his film Slumdog Millionaire. He played the host of Kaun Banega Crorepati in the Danny Boyle-directed film which also starred Dev Patel and Frieda Pinto. Anil Kapoor's son Harshvardhan capitalized on the moment and instagrammed the above picture with the caption: "Who wants to be a millionaire?" Anil Kapoor also tweeted pictures from the museum - in one he posed like his statue and in another he was surrounded by the tourists.
It seems like a double Jhakaas moment:


Unveiling... Yours truly !! Thank you @MTsSingapore for making me look good in wax! #MadameTussaudspic.twitter.com/qtstyKTghG

I just had to pose!! It's so cool!! I love it! @MTsSingapore, this is just an amazing & humbling experience! Thank you! pic.twitter.com/GmcBw3Wbxk

After starring in several regional films, Anil Kapoor started his Bollywood journey in 1983 with Woh Saat Din. The actor has critically acclaimed films like Parinda, Tezaab, Pukar and Virasat to his credit. Anil Kapoor also featured in commercial hits like Ram Lakhan and Nayak to name a few.
Anil Kapoor has also starred in Tom Cruise's Mission: Impossible - Ghost Protocol and American television show 24, which he also adapted in Hindi.
Anil Kapoor was last seen in 2015 films Dil Dhadakne Do and Welcome Back. His upcoming film is Mubarakaan, co-starring his nephew Arjun Kapoor and actress Ileana D'Cruz, Athiya Shetty and Neha Sharma.
Anil Kapoor is married to Sunita and together they have three children - daughters Sonam and Rhea, and son Harshvardhan. Sonam Kapoor is an actor and recently won a National Award (Special Mention) for her role in critically acclaimed Neerja. Rhea is a filmmaker and her sister's stylist. She has produced films like Aisha and her upcoming project is Veere Di Wedding. Harshvardhan debuted in Bollywood last year in Rakeysh Omprakash Mehra's Mirzya.