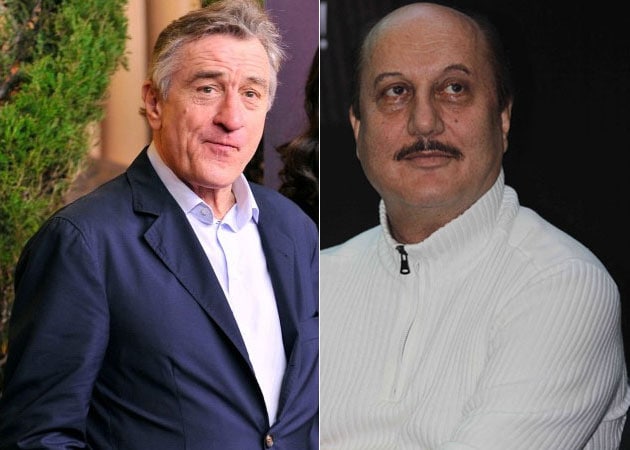 His latest film I Went Shopping For Robert de Niro, which is directed by him, is a tribute to the Hollywood star,

Veteran actor Anupam Kher says that I Went Shopping For Robert de Niro, which is directed by him, is a tribute to the Hollywood star, who has "something else" in his talent.
In an extensive interview, Anupam Kher spoke of what went behind creating the film on his Silver Linings Playbook co-star, and his hopes for its release. Excerpts: Ques: Your film I Went Shopping For Robert de Niro is being premiered at the IIFA this year. Why have you directed a film on de Niro?
Anupam: To me, quite simply, he is the best actor in the world. Which is not to say that I don't respect other actors. There are many brilliant actors, including our own Dilip Kumar, but Robert de Niro is something else. Luckily, I got to know Robert during the shooting of Silver Linings Playbook. He readily agreed to let me make this film.
Ques: You've made the film in a very unique format.
Anupam: Yes, I've made the film as short feature-film. That means the running time has to be less than 40 minutes. But it's a feature film and not a documentary on de Niro. It's actually a tribute from our acting school to the greatest actor alive. It's subtle tribute, not gushy and in-your-face.
Ques: The only other film you've directed is Om Jai Jagdish many years ago. What prompted you to return to direction?
Anupam: It was the enthusiasm level of Shivangi Kshirsagar, who is a student in my acting school. She has written the script for I Went Shopping For Robert de Niro and also played the lead in my film. I had actually sent her and another girl to buy a gift for Robert when I was working with him in Silver Linings Playbook. I was traveling while shooting with Robert.
Ques: You asked Shivangi to buy a gift for Robert?
Anupam: Yes. She had asked me what she could get. I told her to get something that he likes. Shivangi searched on the internet to know more about his likes and dislikes. They found nothing about him on his personal life. There were only the details of his professional life. There is nothing on his personal likes and dislikes anywhere.
Ques: That's quite amazing. Is that how the film was born?
Anupam: Yes. When I returned to India, Shivangi came to me with a script about two girls who are at the crossroads of their lives had to go shopping for a gift for the greatest actor in the world, and how the experience changed their lives. It is a fascinating story of how Robert de Niro affects the lives of these two girls while remaining completely oblivious of the impact he has made on these anonymous lives of two girls on the streets of Mumbai.
Ques: You shot the film on actual locations in Mumbai?
Anupam: Yes, we shot it guerrilla style on the streets of Mumbai, and that too during Holi. We rehearsed in our acting school. Then the crew went out and I gave them instructions from a car on a walkie-talkie. On the day when the two girls had gone shopping, it was Holi. The film's team consists of my staffers. I've used the actors from my school, the CEO and receptionist from my office. Everyone who had a hand in buying that gift for Robert, plays a part in the film.
Ques: Was it easy getting Robert's permission?
Anupam: Luckily for me, we bonded when we worked together. When I asked him if we can use his name, he readily gave his consent. We showed him the film recently. He has been very generous to us.
Ques: What was his reaction?
Anupam: We sent it over to the US for him to watch. He was overwhelmed. He was embarrassed by the praise. And I am not surprised. It's a feature film, and it's tribute to him, though he doesn't feature in it. Robert was very happy with the film. Then he came to my acting school in November. I gave him the gift which we had bought for him and which was the subject of the film.
Ques: What was the gift?
Anupam: That is the surprise element of the film. The two girls in the film actually shopped for Robert de Niro's gift when we shot the film. So it's shot in real time. The film's last shot shows me giving the gift to de Niro.
Ques: What release plans?
Anupam: It gets premiered at IIFA and will also be screened at the Cannes International Film Festival in May. I won't be able to attend it, but I'll send my lead actress. Lots of people have seen it abroad. But only a handful have seen it in India. We will be releasing it commercially both internationally and in India. Hopefully, we will find a good way to release my short film as a full-length feature film