Anupam Kher: Want Sikander to be popular as his contemporaries 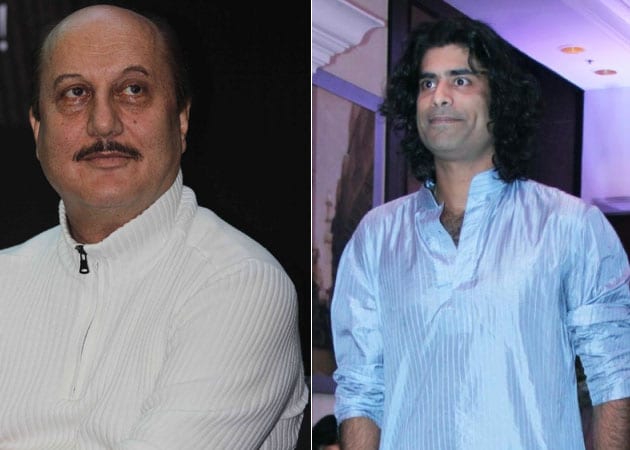 Anupam Kher reveals Sikander is excited about his new film

Veteran actor Anupam Kher's son Sikander may not have had a successful run at the box office so far, but the father hopes the young actor becomes as popular as his contemporaries.

Veteran actor Anupam Kher's son Sikander may not have had a successful run at the box office so far, but the father hopes the young actor becomes as popular as his contemporaries.
So far, Sikandar's journey in B-town has not been smooth. His films -- Summer 2007, Woodstock Villa and Khele Hum Jee Jaan Sey all failed to garner attention at the box-office.
"I would love for him to be as busy and popular as his contemporaries, but he is taking it very well and is excited about his new film. I think he has an amazing role in Tere Bin Laden part 2," Anupam told PTI.
"I think certain things happen at a time... I have faith in him. Can you imagine if he was non talented and yet wanted to be an actor? That would've been a nightmare. Now its a matter of time," he added.
Anupam reveals they do talk and discuss about films and he often gives him suggestion. "It (suggestion) doesn't happen over dining table it happens on a normal conversation when I feel this is how it should be," he said.
Though, the 58-year-old has liked his son's work, he is aware that the films did not do well at the box office. "He himself is brilliant. I say it with great pride but unfortunately in our business success is more important than being brilliant but I am sure it will follow. If there's a possibility where I can produce a film (for him) I would love to," he adds.
Meanwhile, Kher is quite kicked up about his stint on small screen with Anil Kapoor's much talked about show '24'. And the prime reason for him to give a nod for this show was his friendship with Kapoor.
"I play a RAW agent Wasim Khan. It is a two episode role that I have in this season. Anil called me and said there's a role I want you to do. So there was no questioning about it. I hope he reciprocates the same way when one day I call him to do a role for me. 24 is a series which I am an admirer of," Anupam said.
The national award winning actor feels 24 will be a game changer for small screen. "This will be a game-changer because it respects the sensibility of the audience. I also feel that we have moved to another level of television. From Doordarshan, we went to satellite channel from there we went to a certain kind of shows and then reality shows. Now this fiction show has great possibility of doing very well," he added.
Earlier, Kher did a show on TV called Say Na Something To Anupam Uncle and he says he would love to do that show again as today kids are completely different.
"When I did the show earlier I knew the psyche of the children. But not anymore so it could be challenging for me. As today the child knows how to operate smart phone, computers, what is going on in his mind and how much information does translate into knowledge would be very interesting to find out," he said.
"The children today are also very independent. What the child says today at the age of 7 is something I hadn't thought of till the age of 20-21, he adds.