Anushka Sharma Does Not Like Shah Rukh Khan's 'Desi Bond' Pic. But Why?

Shah Rukh Khan introduced himself as 'Desi Bond' from the sets of his new film The Ring in Budapest with a picture on Sunday. Anushka Sharma is both his co-star in the Imtiaz Ali movie and the picture 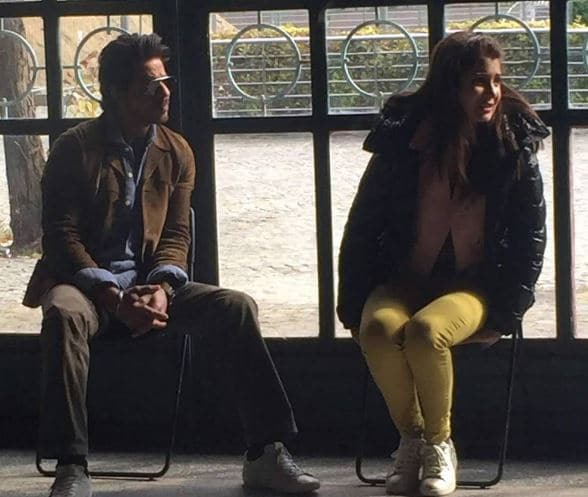 Bond, 'Desi Bond... naam toh sunha hi hoga.
If not, chill, for there is always a first time. Shah Rukh Khan introduced himself as 'Desi Bond' from the sets of his new film The Ring in Budapest with a picture on Sunday. Anushka Sharma is both his co-star in the Imtiaz Ali movie and the picture. Shah Rukh and his little companions pose with the finger-gun while Anushka seems very disapproving of what is happening.
Anushka scores 10 on 10 for that expression.


Desi Bond with Videsi lil ladies.Kids of the lovely production team in Budapest. @AnushkaSharma seems not to approve pic.twitter.com/f9FXyaD6X5

The Imtiaz Ali-directed film is tentatively titled The Ring and fans are in eager wait of the first look of the much-talked about movie. Earlier this month, confusion was created about the film's first look when some netizens failed to grasp the sarcasm of this caption:


'First Look' of Imtiaz Ali's film, allegedly called The Ring. Not a horror film nor a love story...it's a Ninja epic! pic.twitter.com/IHWHgdr6W0

Later, there came a clarification from the actor himself:


The last tweet about the film is a joke. Clarifying for those who don't get my drift & end up distorting stuff. It's just cold in Budapest!

Shah Rukh Khan, 50, loves to share and there is no dearth of posts - ranging from funny to insightful - from the sets of the movie on his social media accounts. The Shah Rukh-Anushka-Imtiaz trio also shot the film in Prague, Amsterdam and Lisbon.


Beauty and beast take your pick.

And the beastly version.

If u believe u can fly...u can..well almost. P.S. B careful of the friction on the pelvic girdle.#srkinstagyaan

Jurriaan our first AD learning how to do pappad & me the countdown. #hindidutchbhaibhai

"I am a cage, in search of a bird." Kafka in Prague. In our case we r only trying to discover characters in our film.

Imtiaz said I could post this picture from the sets...& promised there will be some close ups of me in the film too!

After Imtiaz Ali's film, Shah Rukh will begin working on a film with Aanand L Rai, in which he reportedly plays a dwarf.
Shah Rukh was last seen in Maneesh Sharma's Fan and is awaiting the release of Dear Zindagi, co-starring Alia Bhatt. It releases on November 25. Shah Rukh also has Rahul Dholakia's Raees set for release in January.