Anushka Sharma is a Game of Thrones Fangirl. Here's How we Know 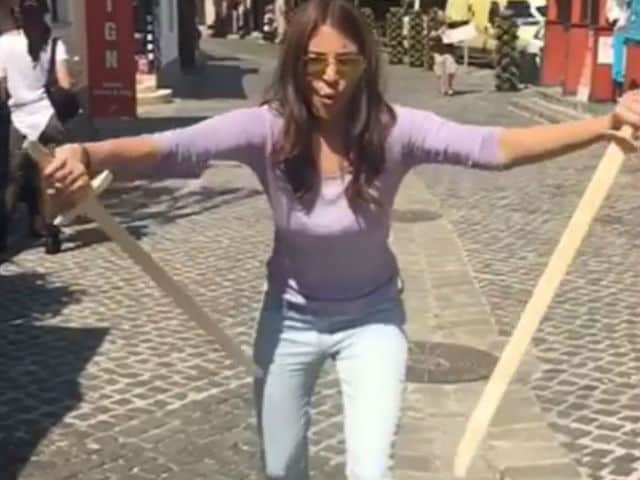 A still from the video posted on Instagram by Anushka Sharma

If all the chatter about the Battle of Bastards wasn't enough excitement, celebrity Game of Thrones fan Anushka Sharma has posted a slo-mo video of her own sword skills on Instagram.
The 28-year-old actress made the video when she was in Budapest filming Sultan some weeks ago - clearly, fun breaks are allowed.


A girl has no name. Just fierce sword fighting talent. #GameOfThrones moment on #Sultan sets at Budapest and that episode 9 though !!

Anushka disarms with the 'needle' attack. (PS: We think she means the ninth episode, which aired recently)
Game of Thrones fans are currently furiously discussing the death of resident evil Ramsay Bolton's richly-deserved end on the latest episode (Battle of the Bastards).
Meanwhile, Anushka Sharma's Sultan hero Salman Khan is currently the focal point of a controversy after likening himself to a 'raped woman' while describing filming the grueling fight scenes in the wrestling movie.
Anushka, who also plays a wrestler in the film, is now in Mumbai promoting Sultan with the rest of the cast, which includes Amit Sadh and Randeep Hooda.
Apart from Sultan, Philauri, Anushka's second film as producer, is keeping her busy. She also stars in Karan Johar's Ae Dil Hai Mushkil with Aishwarya Rai Bachchan and Ranbir Kapoor.