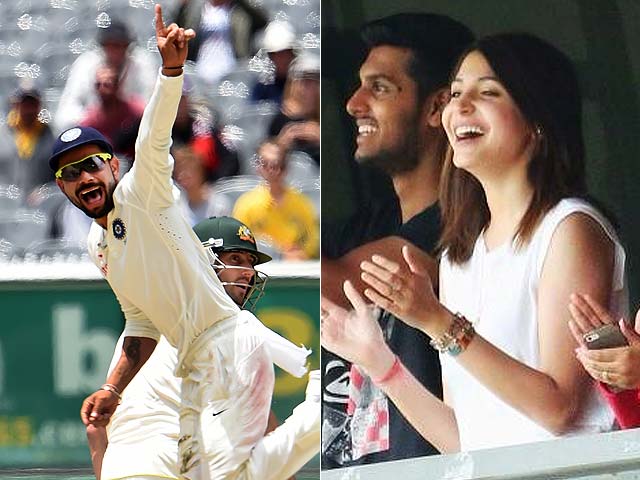 The image on the right was posted on Twitter by @AnushkaNews

Bollywood actress Anushka Sharma was addressed as cricketer Virat Kohli's wife by Australian presenter Michael Slater during his commentary on final day of the third test between Australia and India at the at the Melbourne Cricket Ground.

According to reports on social media, after realising his faux paus, Mr Slater then hurriedly described the Bollywood actress as Virat's 'fiancee.'

Anushka was on the stands supporting her beau in the gruelling contest as Indian batsmen faced the prospect of chasing down what is likely to be a daunting target set by Australia.

Virat, who has been subjected to fierce verbal volleys from the rival team throughout the match, has found steady support from his girlfriend who has been following the on-field action and the banter intensely. On Sunday, during the third Test, he had a heated exchange of words with Australian pacer Mitchell Johnson. But love seemed to conquer all eventually as he completed his ton and blew a kiss towards Anushka who was in the stands that day as well. Virat now has 499 runs in the series, highest by a number four batsman of a visiting batsman in Australia.

Anushka and Kohli have been dating each other for quite some time, but accepted their relationship only recently.