Anushka Sharma to NDTV: Virat is my Arm Candy 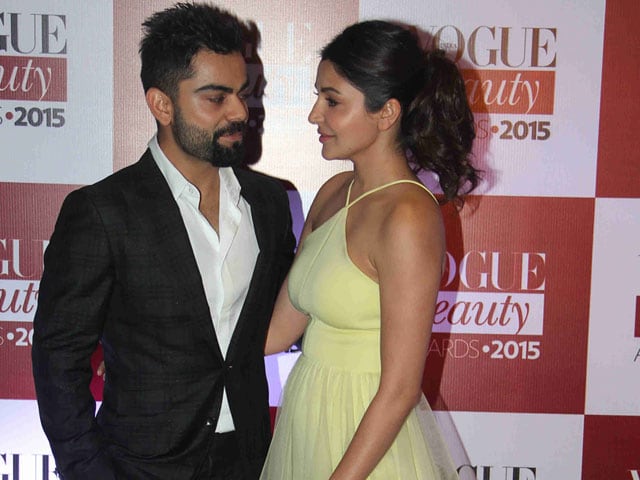 Anushka and Virat at the Vogue Beauty Awards held in Mumbai on July 21.

When asked about her holiday with Virat, a beaming Anushka said, "It was good, it was relaxing and much needed for both of us."

The cameras that were crowding them didn't discourage actress Anushka Sharma and her cricketer beau Virat Kohli from looking deep into each other's eyes at the Vogue Beauty Awards held in Mumbai on July 21.
In an exclusive conversation with NDTV Night Out on the sidelines of the fashion extravaganza, the 27-year-old actress spoke candidly about the vacation that she took with Virat in London recently and the 'handsome companion who walked in with her.' Anushka said, "He's my very, very good looking arm candy."
The holiday, a beaming Anushka said, "was good, it was relaxing and much needed for both of us."
The couple also turned heads at the Wimbledon championship recently. When asked if they had colour co-ordinated their outfits, Anushka said, "I wear mostly whites, blacks and greys and so does he and so we automatically look like we have done something but it's just because we don't like colour. I don't see anything wrong in wearing blacks, whites and greys."
Anushka, who will soon start filming Karan Johar's Ae Dil Hai Mushkilwith co-stars with Aishwarya Rai Bachchan and Ranbir Kapoor, also admitted to being stressed by her back-to-back films. "I'm glad I've been on a holiday. I had four films releasing back to back. Now I'm feeling a little more relaxed and really looking forward to Karan's films." This year, Anushka's already been in NH10, Bombay Velvet and Dil Dhadakne Do. PK, with Aamir Khan, released at the end of 2014.
The actress, who looked stunning in lemon Gauri and Nainika at the Vogue awards, also said, "Beauty has nothing to do with the products you apply. If I can have good and positive thoughts and not fall into a negative state of mind a lot of us get into, then you end up being a really positive person."
Watch: