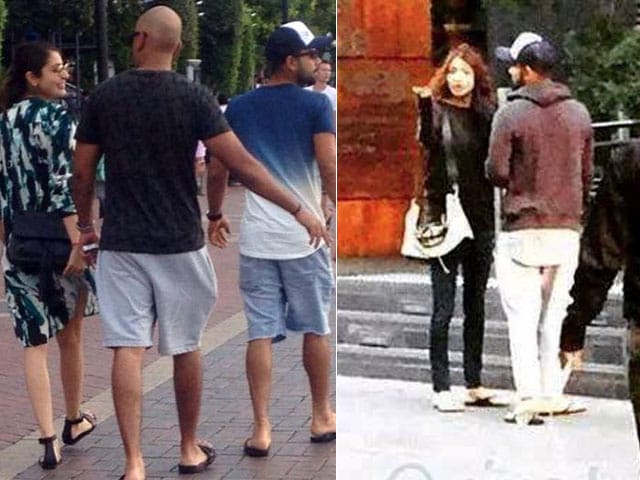 Bollywood actress Anushka Sharma and her beau, cricketer Virat Kohli, who rung in the New Year in Australia, were sighted taking a stroll at Sydney's iconic Darling Harbour yesterday - days ahead of the fourth and final Test against Australia.

In one of the pictures, Anushka, who is riding high on the success of her film PK, looked relaxed and as pretty as she usually does in a short printed outfit while Virat was dressed for comfort in a T-shirt teamed with a pair of shorts. In another, the actress looked elegant in black while her boyfriend complimented her in a white outfit worn with a jacket.

Anushka has been a permanent fixture by her beau's side throughout the tour and her calming effect seems to have worked wonders for his performance - Virat is the second-highest run-getter in the series - his 499 placing him just below Aussie captain Steve Smith who has 581 runs. The cricketer was seen blowing a kiss at the actress after he scored a century in one of the matches during the series.

The inseparable couple were mistaken as husband-wife by by Australian presenter Michael Slater who addressed Anushka as "Virat Kohli's wife" during his commentary on final day of the third test between Australia and India at the at the Melbourne Cricket Ground.

While we're yet awaiting the final result of Virat's performance, the couple surely seem to have bowled Sydney over with their public displays of affection.