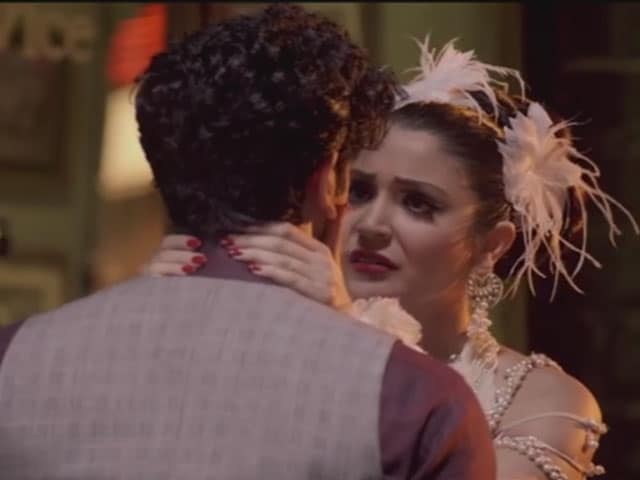 Anushka and Ranbir in a still from Bombay Velvet

Far from being an innocent in love, Anushka's Rosie Noronha is a co-conspirator in a plot against Ranbir's Johnny Balraj

The complex relationship between Johnny Balraj and Rosie Noronha, Ranbir Kapoor and Anushka Sharma's characters in Bombay Velvet, is revealed in the latest track from the movie, Naak Pe Gussa.
Far from being innocently in love with Ranbir's Johnny Balraj, Anushka's jazz singer Rosie seems to be co-conspirator - perhaps unwilling - in a plot against him. Blackmailed by the villainous Karan Johar and his cronies, she is asked to clandestinely procure negatives of certain photographs from the club Bombay Velvet. Siddharth Basu also makes an appearance in the club with Karan Johar, but we're not sure in which direction his loyalties lie.
Yet, ironically, it is Anushka who describes the futility of scorn in a relationship as she sings Naak Pe Gussa for her lover, portrayed as an 'Angry Young Man.'
#NaakPeGussa trended on Twitter for some hours after the song was released.
Based on historian Gyan Prakash's book Mumbai Fables, Bombay Velvet also stars Vivaan Shah, Kay Kay Menon and Satyadeep Misra and will hit theatres on May 15.
Watch