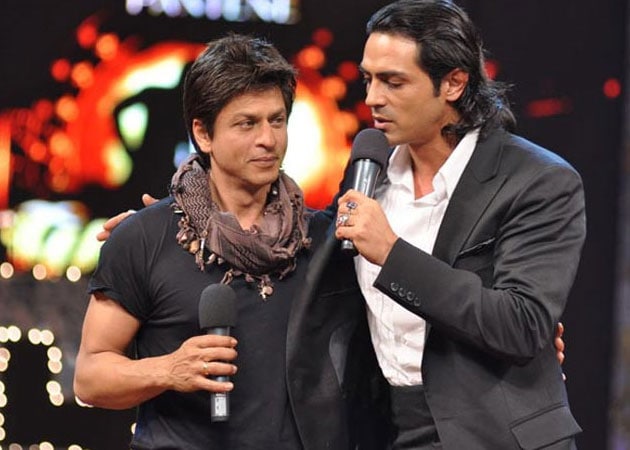 Shah Rukh and Arjun were last seen together in the film Ra.One

Amid speculations over strained relations between him and Shah Rukh Khan, actor Arjun Rampal has said that he never harbours any grudge against anybody in his life.

Amid speculations over strained relations between him and Shah Rukh Khan, actor Arjun Rampal has said that he never harbours any grudge against anybody in his life.
Buzz in Bollywood is that Shah Rukh and Arjun, who were once best buddies, have fallen out after the release of Ra.One (2011), which happens to be the last film they were seen together.
The cold war started after Shah Rukh reportedly trimmed Arjun's role in the film which was the former's home production.
Arjun was conspicuous by his absence at Shah Rukh's residence 'Mannat' in suburban Mumbai where the superstar had recently thrown an Eid party.
However, Arjun's wife Mehr Jessia, who is Gauri Khan's close friend, made up for her husband's absence as she dropped in for the event.
"....Shaad Ali's (director) party was arranged a day before...People should get their facts correct. I would have loved to go to Shah Rukh's house but I was really stuck in work. But my wife did go for it, and that's it," Arjun said.
When asked about his equation with Shah Rukh, Arjun said, "I don't hold a bone of grudge against anybody in my life".
On Prakash Jha's Satyagraha, Arjun said the role had been offered to him during the making of Jha's earlier film Chakravyuh.
"He (Prakash Jha) asked me if I do this part as it is not that a bigger role but he needs this character. I told him even if you want me to say two lines in your film, I will surely do it," Arjun said.
The actor revealed how this "small" role eventually became an "integral" part of the film.
"While writing the character, it became a full-fledged part. He (Prakash Jha) realised this guy is going to be integral part of the screenplay. We need him as this is the character that influences. He is a youth leader who is ambitious.
"He is connected at grassroot level. He becomes the muscle power of this revolution," Arjun said explaining his role.
Arjun is playing the role of a strong socially committed youth who becomes a politician.
Arjun said he would like to work with directors who do not make actors feel "insecure".
"Prakash is a person who will deliver what he has promised. I don't have to worry about anything. One would like to work with directors who don't make you feel insecure at any point of time," he said.
Looking at the promos of Satyagraha it seems Arjun's role is similar to that in Rajneeti but the actor denied the comparison.
"My characters in both the films are different. There is no similarity. Prithvi of Rajneeti comes from rich political background. He is selfish, wanting to create his party, and is power hungry. Whereas Arjun in Satyagraha is different. He is connected at grass root level. Though he is a bit volatile, he feels for the people. He becomes the muscle for this revolution," the 40-year-old said.
Arjun said that his character in Satyagraha is rather antithesis of the one played by him in Rajneeti.
Satyagraha, also starring Amitabh Bachchan, Ajay Devgn, Manoj Bajpayee, Kareena Kapoor, Amrita Rao and others, is slated for August 30 release.