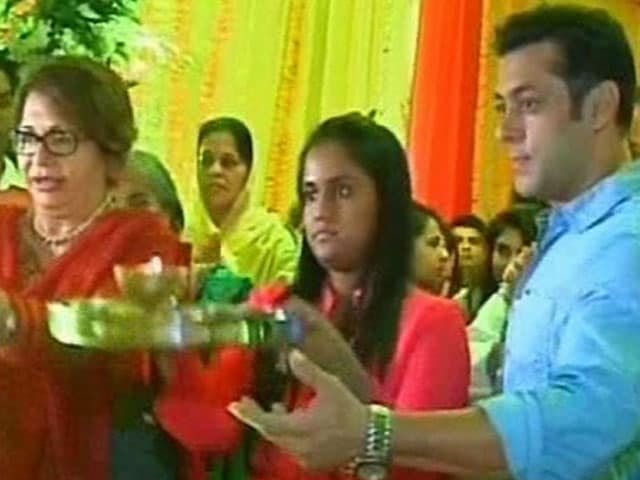 Salman Khan photographed at the Ganpati celebration at Alvira's house in 2014.

Ganesh Chaturthi is a red letter event in the Khan-daan's calendar with Salman and his entire family participating in festivities, often at the family farmhouse in Panvel.
Salman's sister Arpita Khan Sharma tweeted this photo of the 'eco-friendly' Ganesh idol she will be bringing home in a day, although it's unclear whether this is the idol for the Khan celebration or for that of Arpita's husband Aayush Sharma's family:

Last year, the Khans celebrated Ganesh Chaturthi at Salman's other sister Alvira's farmhouse in Mumbai with friends and family.
Karisma Kapoor, Sooraj Pancholi, Mini Mathur and Pulkit Samrat attended. Family present included Salman's father Salim Khan, step-mother Helen, mother Salma and sister Arpita.
This year, the guest list will definitely be missing one. Actress Sonakshi Sinha, a regular at most Khan family dos, will skip the puja as she is busy filming Force 2 in Budapest.
Here's the conversation between her and Arpita:

@khanarpita yaaaa will miss it this time!!! Am shooting in budapest!