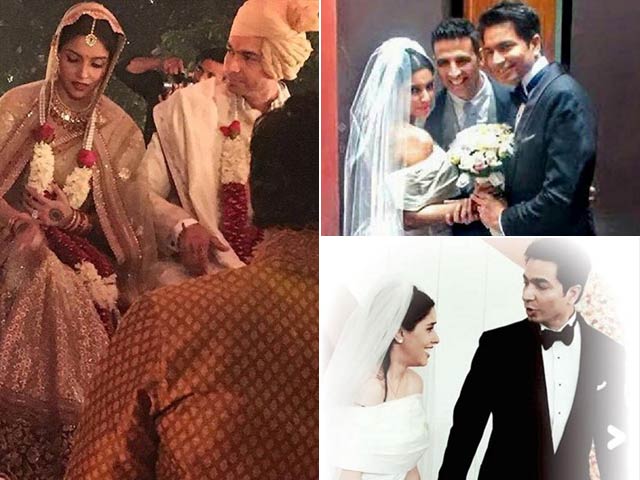 Asin's Housefull 2 co-star Akshay Kumar, who introduced her to Mr Sharma, served as the best man. The second of the two-part ceremony, attended by the couple's close friends and family, was held at the Dusit Devarana hotel in the evening

Actress Asin, 30, married Micromax co-founder Rahul Sharma, 40, in two private ceremonies in New Delhi on Tuesday. Asin's Housefull 2 co-star Akshay Kumar, who introduced her to Mr Sharma, served as the best man and was present on both occasions.The actor tweeted this picture of himself with the newly-weds from their church wedding and wished them 'a lifetime of love and adventures.' (Also Read: Asin, Micromax Boss Rahul Sharma Marry in Church. First Wedding Pic Here)

The second of the two-part ceremony, performed as per Hindu rituals and attended by the couple's close friends and family, was held at the Dusit Devarana hotel in the evening amid tight security. The groom arrived in an open car with the baaraat.
Celebrity designer Sabyasachi, who designed Asin's lehenga-choli for her Hindu nuptials, posted this image of the radiant bride and her groom after the pheras and jai mala ceremony.

For the church wedding, Asin wore bridal white and a veil. Delhi-based music group Elohim Worship band performed at the wedding. "Everything went great at the wedding. We played 2-3 songs. Asin looked beautiful in her white gown. We had a rehearsal on Monday," a band member told news agency PTI.


Congrats to the beloveds! I cannot wait to see pics from the Indian wedding #Asin #RahulSharma #AsinThottumkal #TeamAsin #Wedding

Here's another picture from the wedding album which shows Akshay Kumar sharing a light moment with the newly-weds.

A fan club shared pics of the venue:


This is the hotel (@DusitDevarana ) where #Asin will be getting married to @rahulsharma on 19th January pic.twitter.com/YflpXwIKR3

The actress earlier shared images of her wedding card on Instagram:

A private party is likely to be held at Rahul Sharma's Delhi farmhouse on January 20 and a grand reception will be held in Mumbai for the couple's friends and colleagues on January 23.
Asin, who made her Bollywood debut opposite Aamir Khan in Ghajini, has featured in films like London Dreams, Ready and Bol Bachchan. The actress was recently seen in All Is Well, co-starring Abhishek Bachchan, Rishi Kapoor and Supriya Pathak.
With Inputs from PTI