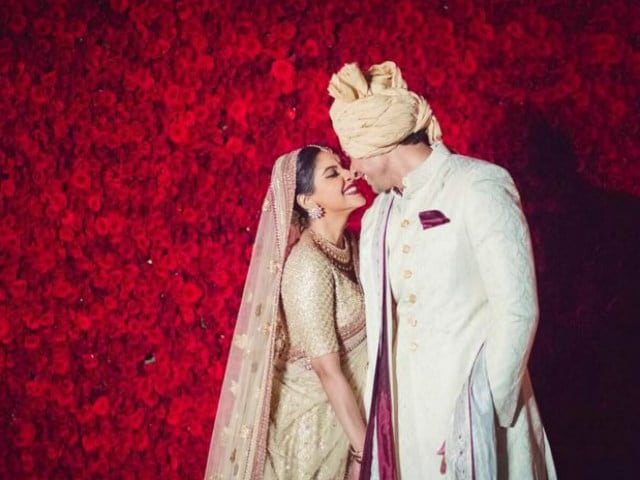 Actress Asin, who married Micromax co-founder Rahul Sharma on January 19 in New Delhi, continued the celebrations with a reception in Mumbai on January 23. Asin shared wonderful photographs from the gala on Instagram and we bring you all of that

Actress Asin, who married Micromax co-founder Rahul Sharma on January 19 in New Delhi, continued the celebrations with a reception in Mumbai on January 23, attended by close friends and family. Asin shared wonderful photographs from the gala on Instagram and we bring you all of that:
Asin and Rahul dated for four years before getting married. It was an 'AR Wedding':

The reception was also attended by Asin's All Is Well co-star Rishi Kapoor, who framed a picture with the couple and Asin's father Joseph Thottumkal.

When the newly-weds shared a hug. Dreamy, isn't it?

Asin met Delhi-based industrialist Rahul through her Housefull 2 co-star Akshay Kumar, who served as the best man at their wedding. He was part of the reception party too!

Asin framed an adorable picture with actress Jacqueline Fernandez, with whom she co-starred in Housefull 2.

Asin and Rahul roped in filmmaker R Balki for a picture. She also made a revelation with this post:


Presenting another one of our dearest common friends who knew it all like Akki! #Balki #BalkiandAkki #ARwedding #Asin #Rahul #LoveLaughterandHappilyEverAfter

Asin's Instagram feed has become her wedding album of sorts, which also offers a sneak peek into the two private ceremonies held in New Delhi on Tuesday. (Also Read: Asin Shares Stunning Pics From Her Wedding to Micromax Boss Rahul Sharma)
After the wedding, Akshay told PTI: "It was a nice affair. Everything went off very well. Asin and Rahul are very private people. Everybody has respected their privacy. It was a very simple affair. Today, they are very happy and I am very happy that I played the Cupid. I hope that they live like this forever."
Asin made her foray into Bollywood with Aamir Khan in Ghajini, and has featured in films like London Dreams, Ready and Bol Bachchan. Asin last worked in 2015 movie All Is Well .