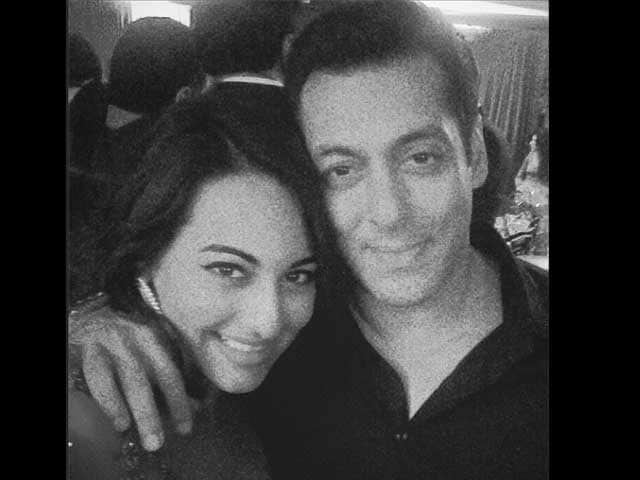 Sonakshi shared her selfie with Salman before the reported argument. This image was posted on Instagram by aslisona

Infact, soon after she arrived at the party, Sonakshi shared a selfie with Salman on Instagram captioned, "Somethings Never Change." But events soon took a different turn

Bollywood actress Sonakshi Sinha has dismissed rumours of an alleged argument with actor Salman Khan at his sister Arpita's reception which reportedly left her in tears.

And the award for best fiction goes to vickey lalwani from mumbai mirror. U have to read the rubbish he has written today

According to a report in Mumbai Mirror, Sonakshi, who had fallen out with Salman some time back, reportedly tried to mend fences with her mentor at his sister's reception, but was spotted in tears after a loud argument with him.

Infact, soon after she arrived at the party, Sonakshi shared a selfie with Salman on Instagram captioned, "Somethings Never Change."

But events apparently took a different turn and according to the Mumbai Mirror report , Sonakshi started a conversation that angered Salman, who started a loud argument. Within a minute, an emotional Sonakshi started crying while, Salman, on the other hand, refused to calm down. The actor was overheard telling Sonakshi in a loud voice, "Maine aisa kabhi nahin bola." The report also alleges that things soured between Sonakshi and her mentor after she reportedly turned down the lead role in the Arbaaz Khan production Dolly Ki Doli.

Sonakshi's relationship with Salman and his family developed after he gave her a break in Dabangg and worked with her again in Dabangg 2. The actress is a part of most festivals and parties in the Khan household.