Bipasha and Karan's wedding will take place in a suburban Mumbai hotel on Saturday evening, which will be followed by a dinner party. A combined mehendi ceremony will be held on Friday 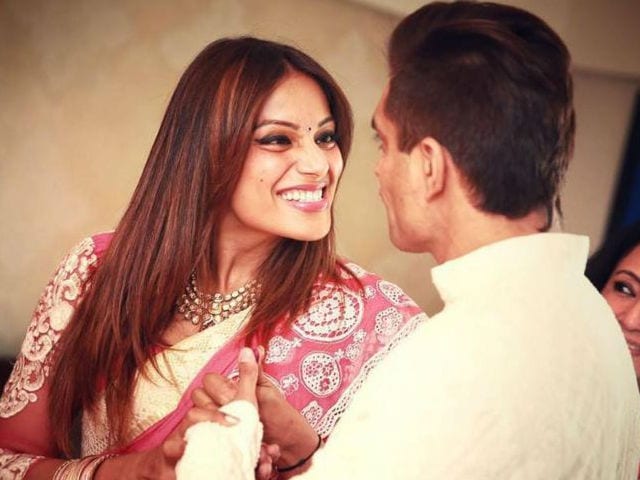 This image was posted on Instagram by Karan Singh Grover

The first of actor couple Bipasha Basu and Karan Singh Grover's Bengali-style wedding rituals began with a puja on April 28 - likely the Bengali 'briddhi' that invokes ancestors and is performed by the father of the bride.
Here's bride-to-be Bipasha at the puja with her father, Hirak Basu, at her Mumbai residence. Bipasha, 37, wears the traditional Bengali headdress called a 'mukut':

Bipasha looked stunning in a pink sari which she accessorized with a multistring kundan necklace and matching earrings while Karan, 34, complemented his fiancee in a white kurta:

Apart from Bipasha's family her posse of close friends were at the puja - designer Rocky S, fitness expert Deanne Panday and producer Suzanne Dadhich. Rocky S has also designed Bipasha and Karan's wedding outfits.
It's time for a selfie:

Bipasha, Karan, Suzanne and Deanne had a lot of fun behind-the-scenes. Here's proof:

The friends were busy posing while Bipasha's father was still engrossed in the puja, as posted by the bride's sister Vijayeta:

Bipasha also happily posed for a pic with her gift basket:

Here's what it contained:


And the gifts pour in Thoughful and loving Happy monkeys

Bipasha and Karan's wedding will take place in a suburban Mumbai hotel on Saturday evening, which will be followed by a dinner party. A combined mehendi ceremony will be held on Friday.
Bipasha and Karan co-starred in 2015 horror film Alone. This is Bipasha's first marriage while it's the third for Karan. He was married to Saraswatichandra actress Jennifer Winget from 2012 to 2016 and actress Shraddha Nigam from 2008 to 2009.