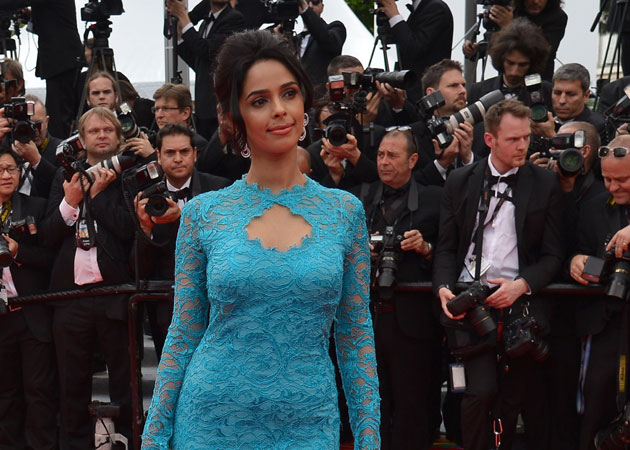 Before departing for Cannes, Mallika announced that one of her outfits would be a lehenga created by Indian designer Manish Tripathi

Actress Mallika Sherawat made a respectable showing in blue lace Pucci and sparkling Boucheron diamonds at the opening ceremony of the Cannes Film Festival. As the only Indian actress on the red carpet, Mallika had all desi eyes on her in the absence of fellow country women Aishwarya Rai Bachchan and Sonam Kapoor. Mallika, who will be inaugurating the India Pavilion this year, thanked both Pucci and Boucheron on Twitter:

This is Mallika's fifth year at Cannes. Over the years, she has transformed her Croisette closet from costume-y to couture-ish. Her careening fashion graph has contained highs in the form of as olive Victoria Beckham and black and nude Dolce & Gabbana as well as lows such as an anonymous yellow gown and a lavender Dolce & Gabbana full-sleeved dress that bunched across her midriff.
Before departing for Cannes, Mallika announced that one of her outfits would be a lehenga created by Indian designer Manish Tripathi. Possibly, that's what we'll see her in at the opening of the India Pavilion where she'll be rubbing shoulders with Kamal Haasan, head of the official Indian delegation to Cannes.