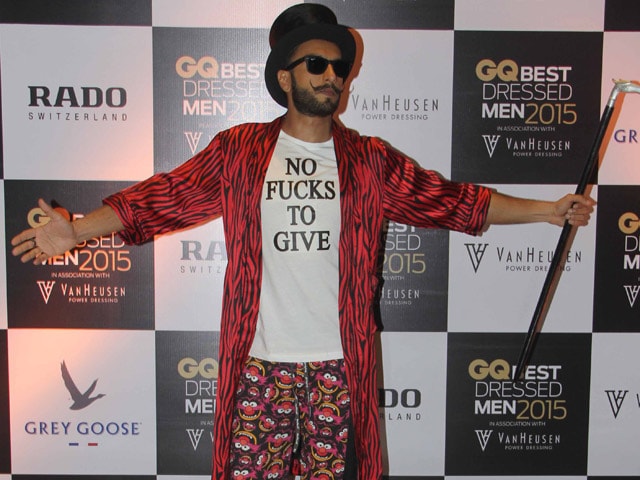 Ranveer Singh at the GQ Awards in Mumbai.

Actor Ranveer Singh put the party into pyjamas as he showed up at the GQ Best Dressed Men 2015 Awards. Ranveer may seem like an attention hound - people who wear Muppet pyjamas and Sylvester fluffy slippers generally tend to - but according to his Dil Dhadakne Do co-star Anil Kapoor this has been Ranveer's style since he was a child.

"Ranveer has always been like this ever since he used to come for Sonam and Rhea's birthday parties," said Anil Kapoor. (Also Read: The Clothes Ranveer Singh Wears. Awesome? Insane? Both?)

While he may have been friends with Sonam and Rhea when he was younger, no prize for guessing who his favourite member of the Kapoor family is now. They may have spent plenty of time together at the recent IIFA Awards but Ranveer and Arjun clearly hadn't run out of things to talk about.
When asked about their reportedly highly successful stint as host, Arjun didn't want to spill the beans. There have been rumours that the two boys even took permission before cracking jokes at anyone's expense.
Arjun said, "We'll talk about all this later once you've seen the show and you have more of a reference point and it's more organic."
Well we're looking forward to that!