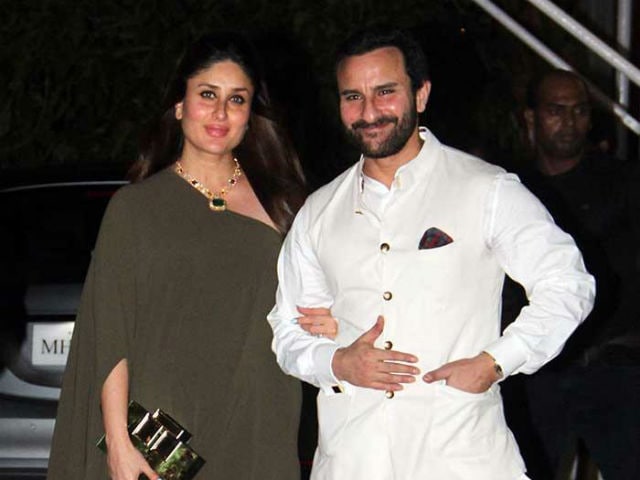 For parents-to-be Kareena Kapoor and Saif Ali Khan, baby will arrive anytime now and the 46-year-old actor says he's thrilled by his impending fatherhood. "This age is great. You are relaxed and settled in your life, so you can share happily. I think it's also a great expression of my relationship with Kareena. To have a child now completes us. There is something about a baby that is kind of half mine and half of hers, so, it's a nice feeling," said Saif, according to a press release. Saif and Kareena, 36, married in 2012 after dating for four years. Saif has two children - daughter Sara and son Ibrahim - with first wife Amrita Singh.
Saif will also have a second reason to celebrate - the trailer of his new film Rangoon is expected soon. The film is directed by Vishal Bhardwaj, with whom Saif made Omkara, and co-stars Kangana Ranaut and Shahid Kapoor. The film is a drama set against the backdrop of World War II.
"Vishal offered me this part [in Rangoon] after Omkara, so he has wanted to make this film for a long time. It's a strong part, and he creates such a wonderful atmosphere and a great world for you to work in. I want to be a part of his cinema because it makes me feel like an interesting actor," said Saif Ali Khan, who won a National Award for his performance in Hum Tum.
Saif was last seen in 2015 film Phantom with Katrina Kaif. Rangoon is expected to release next year.
Kareena Kapoor, meanwhile, had a small role in Salman Khan's 2015 blockbuster Bajrangi Bhaijaan and has been cast in Veere Di Wedding with Sonam Kapoor and Swara Bhaskar. She was last seen in drug drama Udta Punjab.