Amid the exodus of celebrities to IIFA weekend in the US, a sizeable number of stars were spotted at the ballot boxes in Mumbai and Chennai in phase six of the Lok Sabha elections.

Amid the exodus of celebrities to IIFA weekend in the US, a sizeable number of stars were spotted at the ballot boxes in Mumbai and Chennai in phase six of the Lok Sabha elections.
The Bachchans, who do everything together, cast their votes en famille - Amitabh, Jaya, Abhishek and Aishwarya, actors all. The Bachchans and filmmaker Rakesh Roshan were among the later voters of the day. 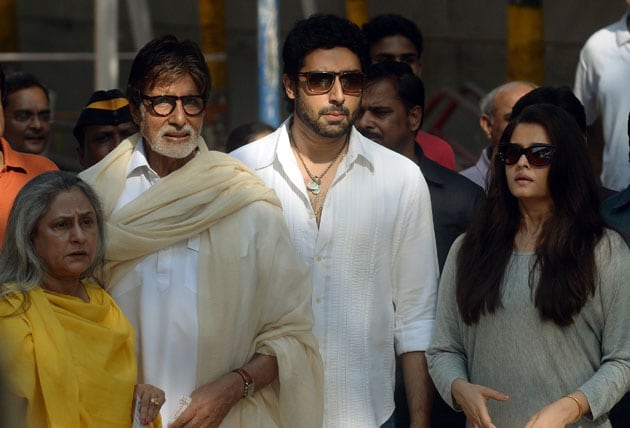 Big B, Jaya, Abhishek and Aishwarya Bachchan at the polling booth
Also voting at the close was Shah Rukh Khan who cleared his calendar for voting day well in advance. SRK said earlier in the day: " Most times I don't even get to choose the channel I want to watch on tv. Today I have an opportunity to choose my country's future. Awesome!." 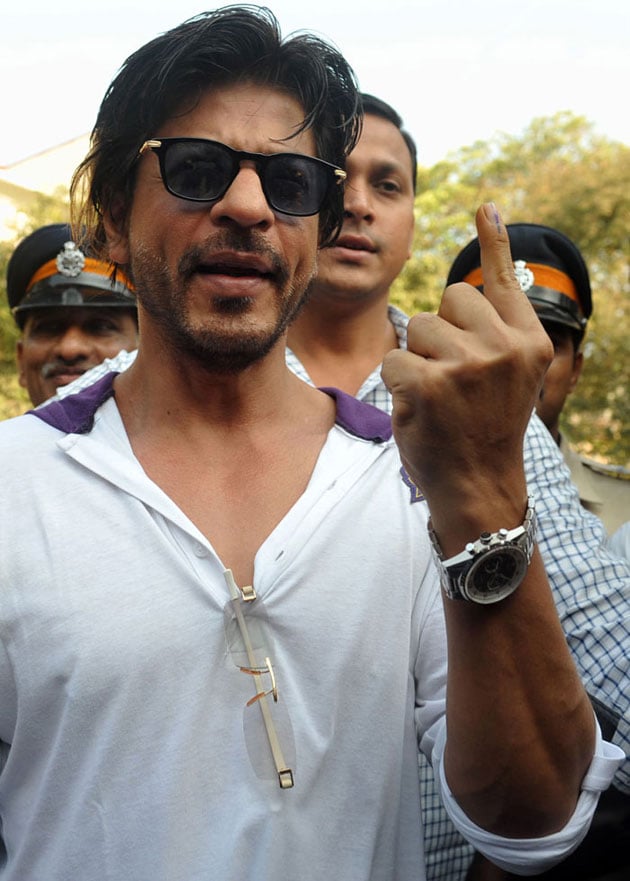 SRK at the polling booth
Earlier, Tamil superstar Rajinikanth was the first voter at the Stella Maris College polling booth in the constituency of Central Chennai. Rajini Sir, whose next starring role is in the animated Kochadaiiyaan, met BJP's man for the top job Narendra Modi recently and described it as a 'friendly meeting.' Rajinikanth votes in Chennai
Rajinikanth's colleague Kamal Haasan also voted in Chennai and told reporters, "We need to aim for a stable government. Price rise and corruption are the main issues." Kamal Haasan after casting his vote
Hema Malini, BJP's candidate from Mathura, who also voted earlier in the day, emphasised on the importance of voting said it was a very good thing. Hema Malini emphasised on the importance of voting
In Mumbai, celebrities voting included Aamir Khan who has been actively encouraging voter turnout. On the second season of his TV show Satyamev Jayate, Aamir devoted an episode to the electoral process, asking voters to make informed choices and to keep corrupt candidates out. At the polling station, Aamir said, "Elections are an important process of democracy. I hope many people come out and vote."Aamir's wife Kiran Rao also voted. Aamir casting his vote
Actor Ranbir Kapoor was also seen casting his vote. He said, "I have exercised my right and I want you to do the same. I hope everyone comes out of their houses and vote for their favourite candidate. I felt lot of youth is going to come out and vote this time." 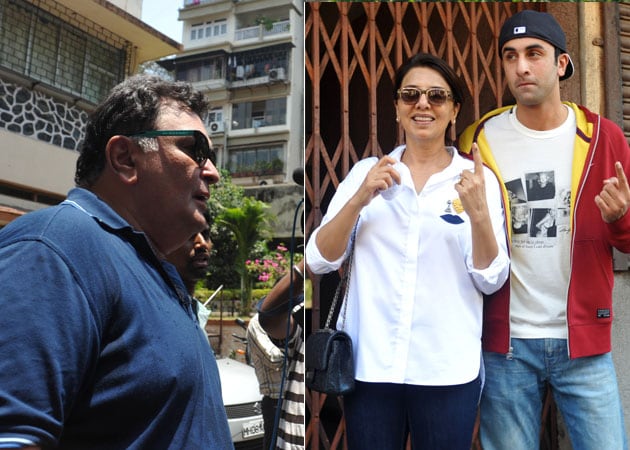 Ranbir with parents Rishi and Neetu Kapoor
On the topic of his colleagues who are at IIFA, he played safe and said, "People have their commitments and I am no one to judge."
The Dirty Picture star Vidya Balan voted in Chembur, Mumbai. Vidya, who spent the last few month promoting the International Indian Film Academy or IIFA awards, has now cancelled her appearance at the just-started award show in the US to be able to vote. After voting, Vidya said, "It is my responsibility and I hope things change for this country. Tomorrow if I point a finger at someone, there should be this voting mark on my finger." 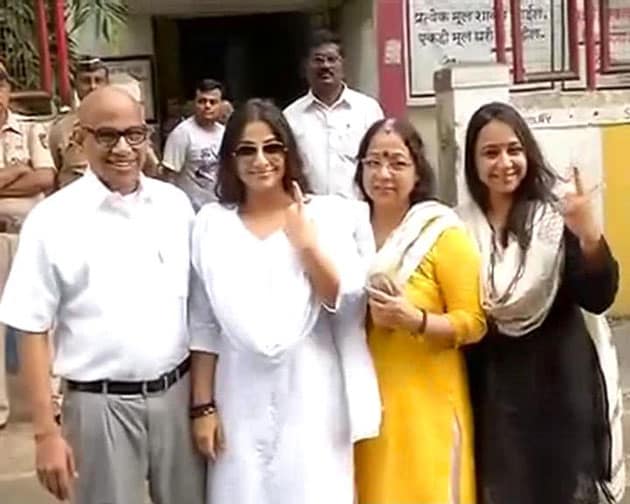 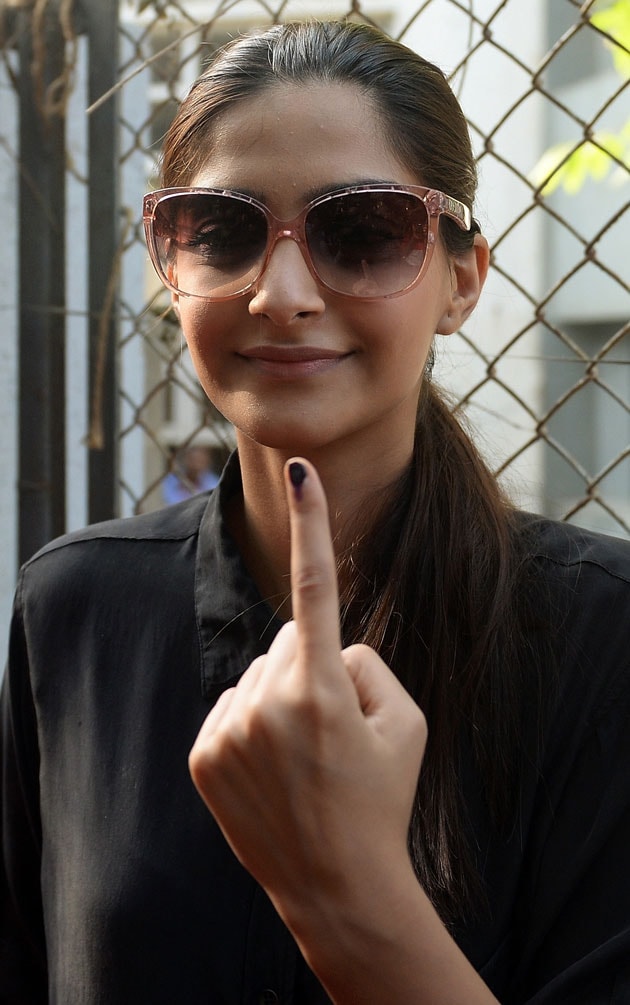 Sonam Kapoor after casting her vote
On Twitter, actresses Shilpa Shetty, Preity Zinta and Dia Mirza posted selfies and urged people to go out and vote.
Shilpa tweeted: Hey Tweeto's Every vote counts. Make yours count too be a responsible Indian.
Preity tweeted: It's time to stop complaining about the system & take action. Boys n girls either Vote now or forever keep Quiet ! 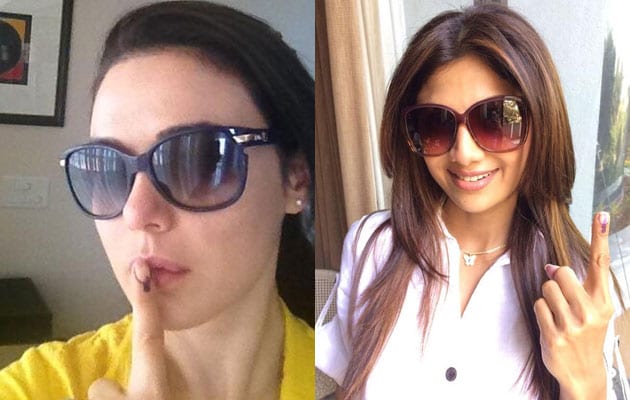 This image is a combination of images posted on Twitter by @realpreityzinta and @TheShilpaShetty
Dia tweeted: Thank you Khar Police and thank you EC for making it such a simple n convenient experience 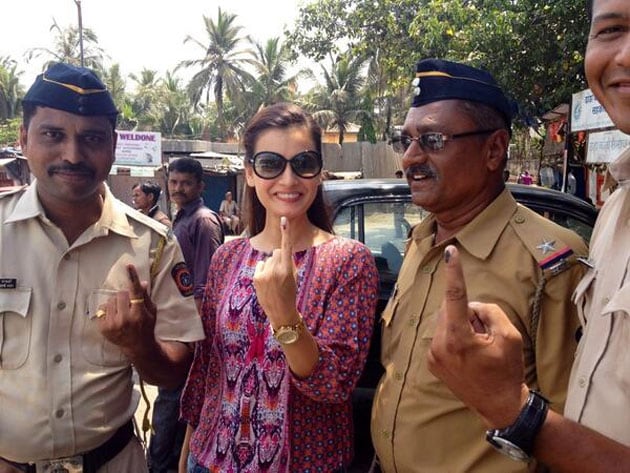 This image was posted on Twitter by @deespeak
Rajya Sabha member and Bollywood writer Javed Akhtar is one of the celebs facing the flak for skipping the elections and attending IIFA. His children Farhan and Zoya however made it a point to cast their votes. 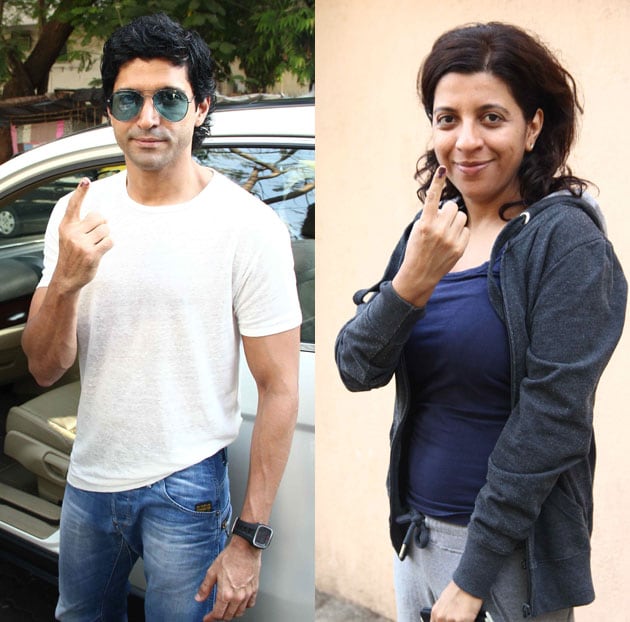 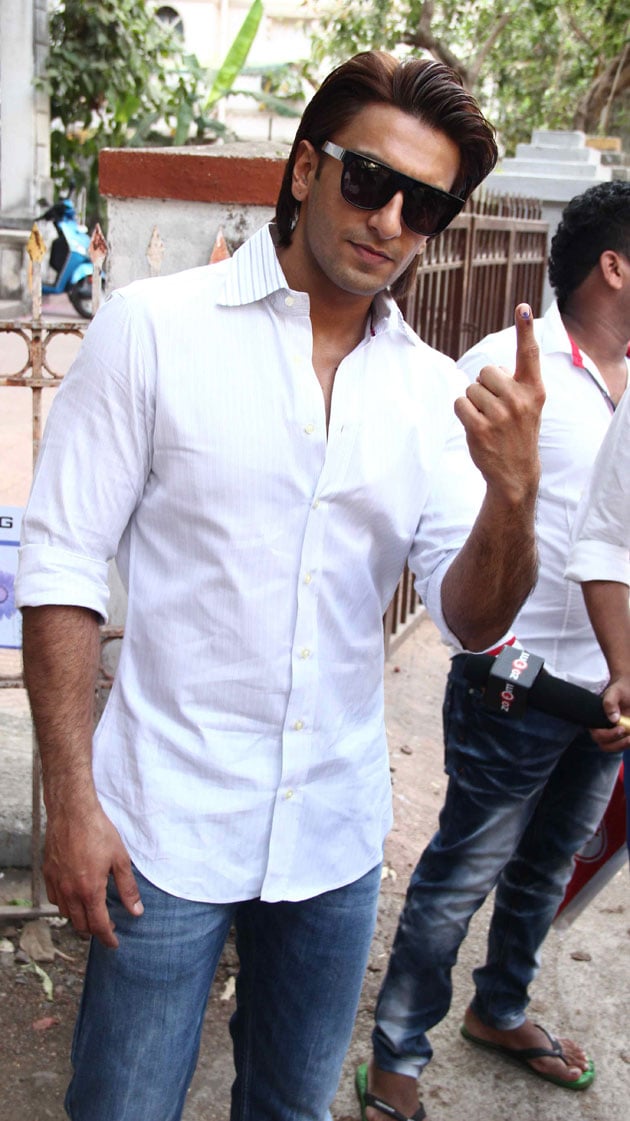 Khushboo at the polling booth 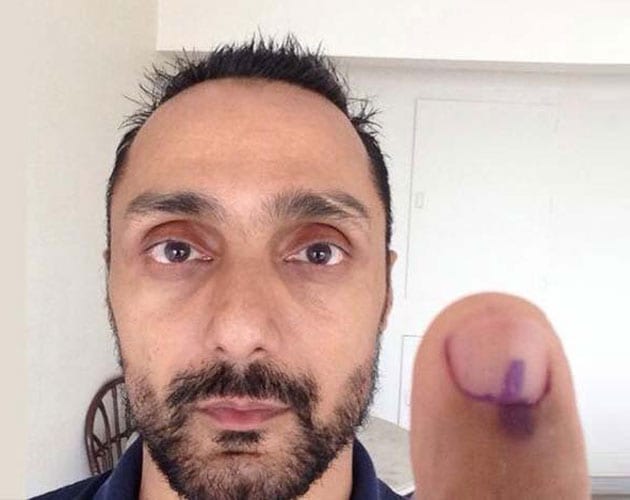 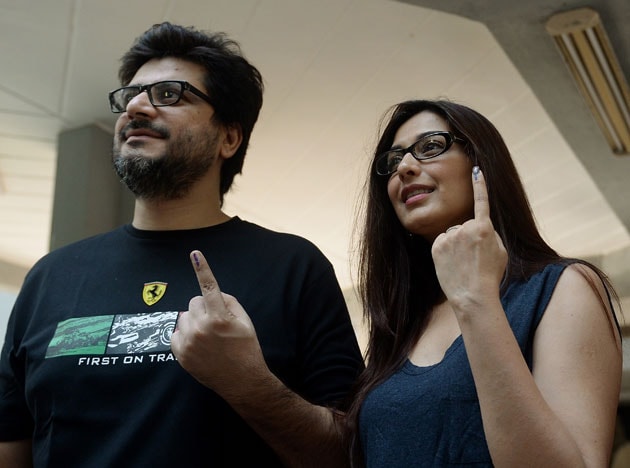 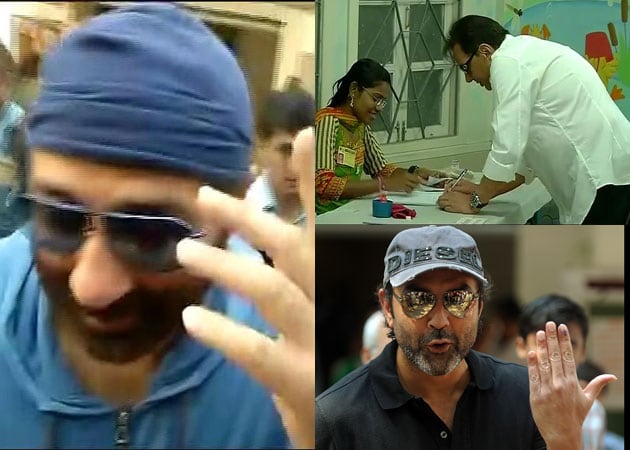 The Deols casting their votes 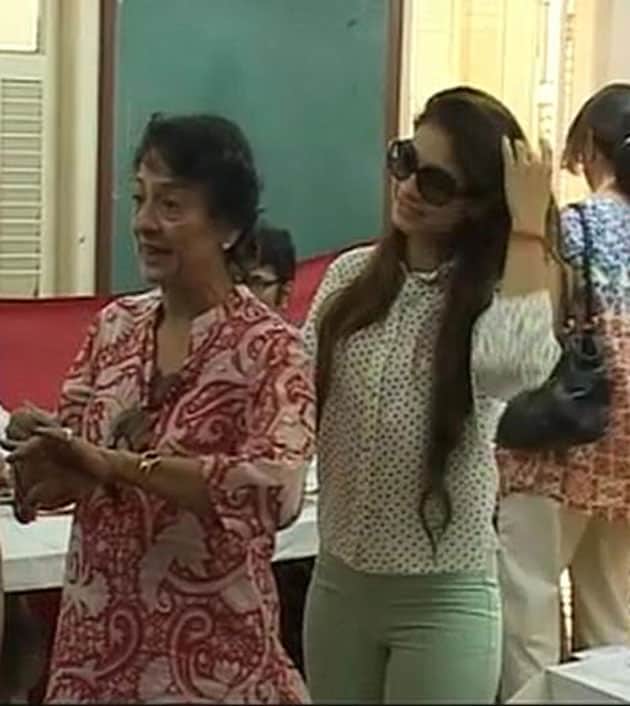 Tanuja and Tanishaa at the polling booth