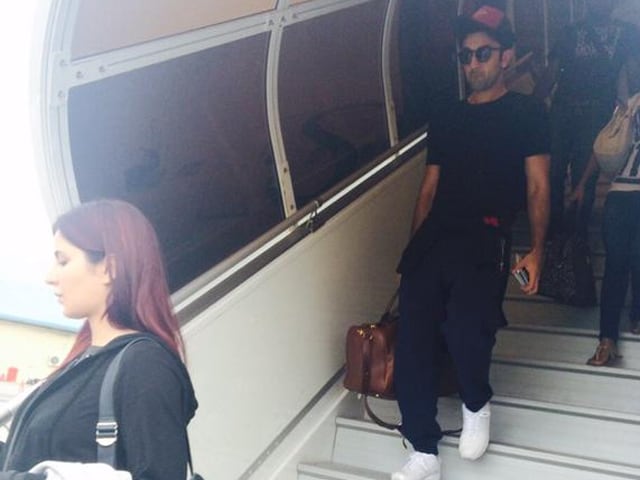 This image was posted on Twitter by Katrina Kaif Daily

Last time Ranbir and Katrina went for a beach vacation, they made quite a few headlines. (Remember Ibiza?)

Bollywood actors Ranbir Kapoor and Katrina Kaif have reportedly taken a well-deserved break from their hectic work schedule and have reached Maldives for a private beach vacation.
These pictures of Ranbir and Katrina reportedly arriving in Maldives are doing the rounds on social media platforms. Both Ranbir and Katrina are dressed in black and look at ease, without their usual hiding gears.

Last time Ranbir and Katrina went for a beach vacation, they made quite a few headlines. (Remember Ibiza?)
Katrina was also recently spotted at a Kapoor family dinner with Ranbir and his family including Neetu Kapoor and Riddhima. Ranbir's grandmother Krishna Kapoor, uncle Randhir Kapoor and cousin Aadar Jain were also seen.
Meanwhile, Ranbir will next be seen in Anurag Kahyap's Bombay Velvet co-starring Anushka Sharma and filmmaker Karan Johar. The film is directed by Anurag Kashyap and will release on May 15. The actor was earlier busy shooting for Imtiaz Ali's Tamasha with Deepika Padukone and will soon start working on his home production film Jagga Jasoos with Katrina.
Katrina on the other hand, has been busy with Abhishek Kapoor's Fitoor, which is an adaptation of Charles Dickens' The Great Expectations. The film also stars Aditya Roy Kapur and Rekha.