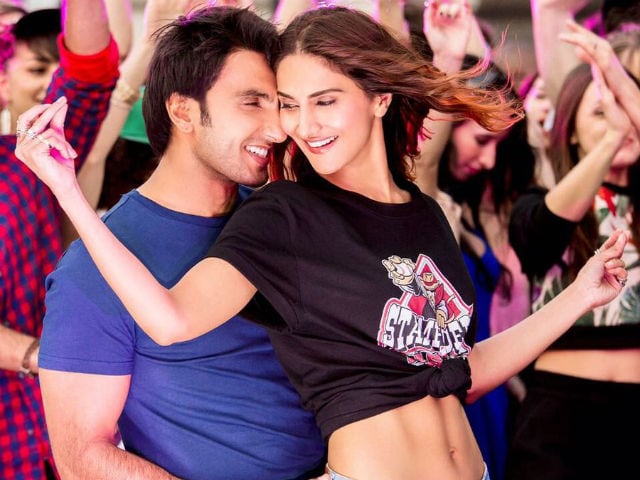 Befikre Box Office Collection Day 3: Ranveer Singh and Vaani Kapoor in a still from the film

The weekend numbers for new film Befikre, starring Ranveer Singh and Vaani Kapoor, are in and trade analyst Taran Adarsh tweets that the first three days' box office receipts total upto a little over Rs 34 crore. Sunday's business was higher than that of Friday and Saturday, with Befikre making Rs 12.40 crore on its third day. The film has shown an upward trend in collections each day, as per Taran Adarsh's tweet.
Befikre, directed by Aditya Chopra, opened last Friday to mostly unflattering reviews from critics. It deals with the theme of casual sex and no strings attached relationships, as experienced by the characters played by Ranveer Singh and Vaani Kapoor.
On Monday morning, Taran Adarsh tweeted:

Meanwhile, Shah Rukh Khan and Alia Bhatt's Dear Zindagi has made almost Rs 65 crore so far, since releasing at the end of November:

Befikre, set in Paris, is the fourth film Aditya Chopra has directed and his first without Shah Rukh Khan, with whom he made Dilwale Dulhania Le Jayenge, Mohabbatein and Rab Ne Bana Di Jodi. Of working with Ranveer, Aditya Chopra wrote in a statement before the film released that he wouldn't have made Befikre "if an actor called Ranveer Singh didn't exist."
In his review for NDTV.com, Saibal Chatterjee gave Befikre 2.5 stars, writing: "Befikre is a love story with a slight difference. If only it had more story and less love, it might have been a much better and more rounded film... In Befikre, what happens in Paris shouldn't have strayed beyond the main square of the Louvre."
Over the weekend, Ranveer, who has now been acting for six years, tweeted about watching Befikre with an audience:


And now for the best part of it all! Watching #Befikre with a live audience! What a feeling! Truly blessed! #6YearsOfRanveerSingh

Befikre, with music by Vishal-Shekhar, is the penultimate big Bollywood movie of the year. Aamir Khan's Dangal closes 2016 with a bang on December 23.
Ranveer Singh is currently working on his new movie Padmavati, co-starring Deepika Padukone and Shahid Kapoor. Vaani Kapoor, whose second film Befikre is, has not announced a new project.