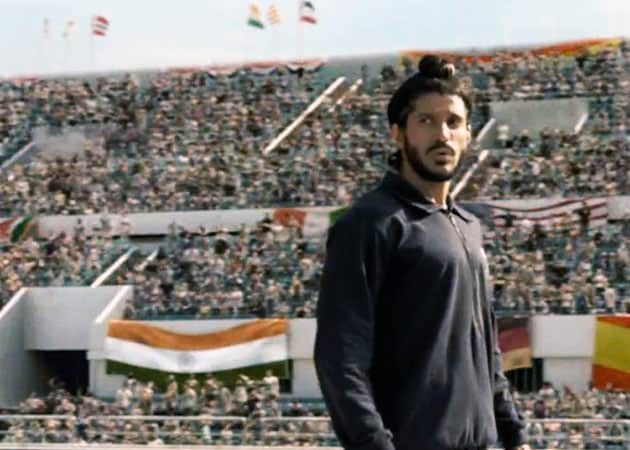 Filmmakers tried to woo movie buffs with subjects as diverse as a revenge comedy, an erotic thriller, a tragic love story and a candyfloss campus romance this Friday, but audiences are still flocking to the halls to catch Bhaag Milkha Bhaag.
Movies that hit the theatres on Friday (July 26, 2013) include Bajatey Raho, Nasha, Issaq, Love U Soniyo and Hollywood film The Wolverine.
But viewers are still buying tickets to watch ace athlete Milkha Singh's life story in Bhaag Milkha Bhaag, which released on July 12.
According to trade experts, Hugh Jackman's Hollywood film The Wolverine has performed better than the Bollywood films this Friday.
Trade analyst Taran Adarsh is not surprised with the Hollywood film's performance.
"As expected, Hollywood overpowers Bollywood at the domestic box office. The Wolverine collects Rs 3.15 crore nett on Friday (all languages)," he wrote on Twitter.
The movie's collection is expected to rise.
"The Wolverine had 65 percent occupancy on opening day. We are expecting it to rise to 80 this weekend," said Puneet Sahay of Spice Cinemas.
Bajatey Raho, which features Dolly Ahluwalia, Ranvir Shorey, Vinay Pathak and Tusshar Kapoor, and Prateik and Amyra Dastur-starrer Issaq, had an average opening.
"The former had 46 percent occupancy and the latter 50 percent. The bold Nasha followed them with 35 percent occupancy. Love U Soniyo didn't have a good opening as there was only 10 to 15 percent occupancy for it on the first day," said Sahay.
While Nasha marked the entry of controversy queen Poonam Pandey in Bollywood, veteran actress Rati Agnihotri's son Tanuj Virwani found his launchpad in Luv U Soniyo.
The buzz for these movies was high thanks to heavy promotions, but Bhaag Milkha Bhaag still holds a strong clout.
Adarsh has declared the Farhan Akhtar starrer as a super hit.
"Bhaag Milkha Bhaag" collected approximately Rs 26.05 crore in second week. Grand total is Rs 79.79 crore. It is a super hit," Adarsh wrote on Twitter.
Sahay said that even on weekdays, the biopic is doing well.
"On weekdays there was 60 percent occupancy and this weekend we are expecting it to go up to 80 percent," he said.
The Rakeysh Omprakash Mehra movie was declared tax free in Maharashtra, Delhi and Goa.