Mariyappan and Varun won medals in the men's high jump T-42 event. Bollywood superstar Amitabh Bachchan was elated over their win when he tweeted: "Joy for India .. Gold & Bronze for Thangavelu and Bhatti in high jump ! COME ON INDIA !!!" 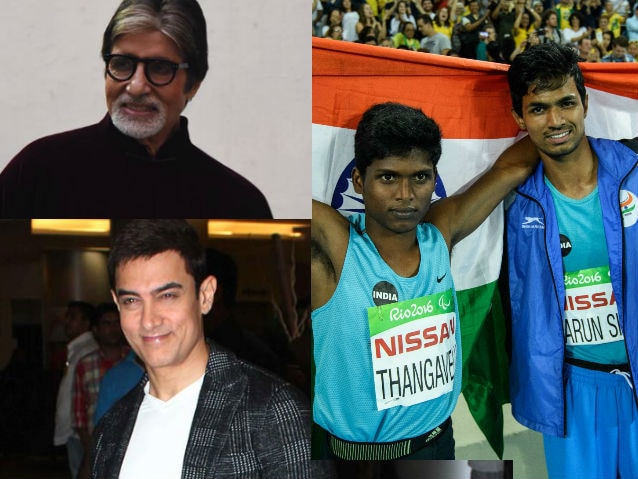 It was a moment of double celebration on early Saturday morning when athlete Mariyappan Thangavelu clinched a gold medal and Varun Singh Bhati won a bronze at the Rio Paralympics and Bollywood was proud of their victory, according to Twitter.
Mariyappan and Varun won medals in the men's high jump T-42 event. Bollywood superstar Amitabh Bachchan was elated over their win when he tweeted:


Congratulations Mariyappan! You have done India proud. Thank you. Love. a.

Actress Anushka Sharma, who was last seen as a wrestler in Sultan was impressed with their 'stellar' performances.


Congratulations #MariyappanThangavelu and #VarunSinghBhati on the absolutely stellar performance and on creating history.. #Paralympics


Keep shining #MariyappanThangavelu & #VarunSingh . Ur spirit inspires all of us to believe in ourselves again #Paralympics#PrideOfOurNation

Playing is reward in itself, but sometimes its nice to have the icing on the cake too. #Paralympicshttps://t.co/eeric7wWR1

A high jump for #MariyappanThangavelu a giant leap for #india Finally we win #gold#proudindian#Paralympicshttps://t.co/ZfhLO1KC2O

Mariyappan became the first Indian high-jumper to win a gold medal at the Paralympics, with a leap of 1.89 metres. Varun jumped 1.86 metres to be ranked third.