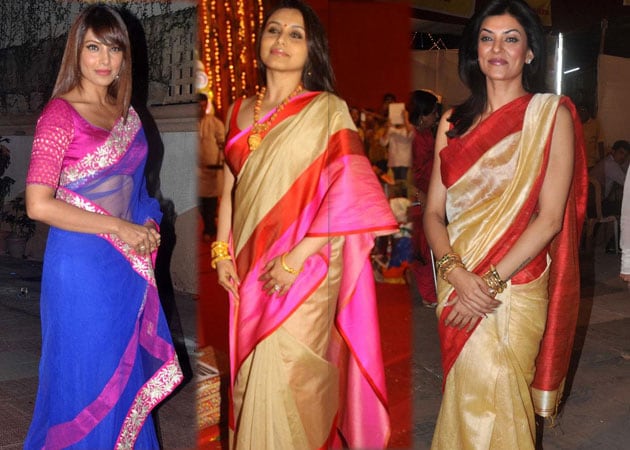 Bipasha Basu, Sushmita Sen and Rani Mukherjee were among renowned actresses felicitated Sunday at the 19th Kolkata International Film Festival which came to an end with a celebration of women power.

Bollywood beauties Bipasha Basu, Sushmita Sen and Rani Mukherjee were among renowned actresses felicitated Sunday at the 19th Kolkata International Film Festival which came to an end with a celebration of women power.
Veteran actress Mousumi Chatterjee and leading Bengali film heroine Koel Mullick completed the list of "pancha kanya" (five daughters) feted by West Bengal Chief Minister Mamata Banerjee at the star-studded closing ceremony of the eight-day festival.
Before a packed Science City auditorium audience, Banerjee presented the actresses -- all of whom either reside or have their roots in the state -- with shawls and mementoes, and acknowledging their contribution to the tinsel world.
All five were moved.
Rani had nice words for Ms Banerjee.
"She has transformed Bengal. Since she became the chief minister, Bengal has changed for the better. The ride from the airport to the Science City was great. Mamata Banerjee is an inspiration to a lot of women," Rani said.
"Mamatadi, by inviting us and allowing us to be a part of this festival, did a great ending," said Mousumi.
Sushmita was thrilled.
"I am so happy today. After all, I am a daughter of Bengal. What a joy to be present here to receive this wonderful honour. It's a blessing to belong to such a country and state," said Sushmita.
Bipasha said: "We all have dreams and if we keep believing in our dreams, we will succeed."
Mamata Banerjee, on her part, asked the Bollywood personalities not to snap their ties with Bengal. "Don't forget Bengal. We have to restore the golden glory of the state," she said.
She also invited to the dais parents of Rani and felicitated them.
Octogerian Bengali singer Dwijen Mukhopadhyay and yesteryears romantic hero Biswajit were also feted.
The chief minister said the festival, during which 189 films from 66 countries were screened, would turn competitive from next year.
The Network for the Promotion of Asian Cinema (Netpack) award was won by Bangladeshi director Mustafa Sarwar Farooqi's feature film Television.
The closing function also saw the unveiling of the festival's permanent logo created by Tapan Barik.