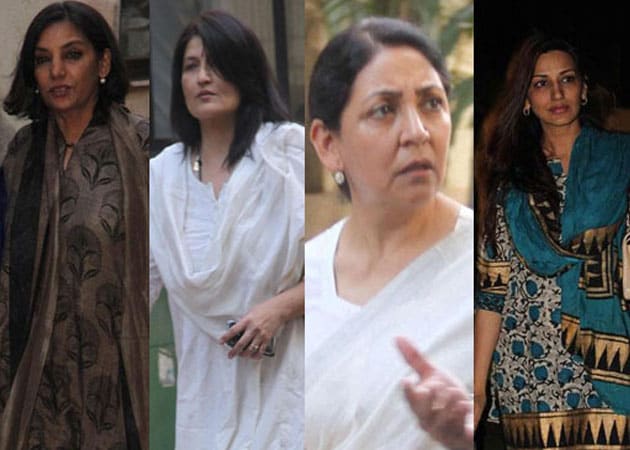 Bollywood celebrities were in tears as they bade farewell to veteran actor Farooq Sheikh, who was laid to rest at the Andheri graveyard on December 30.

Bollywood celebrities were in tears as they bade farewell to veteran actor Farooq Sheikh, who was laid to rest at the Andheri graveyard on December 30.
The body of the 65-year-old actor was earlier in the day brought to Mumbai from Dubai, where he died after a cardiac arrest on December 27.
Farooq's close friends and family members were inconsolable and shared their memories about him.
"I will never meet a person like him. His friendship matters a lot to me. I was lucky to find a co-star like him. He never did any film for money but only if he liked the script," Deepti Naval told reporters.
Sonali Bendre broke down in front of the media.
"I was shocked when I heard the news. I cannot eat biryani without him... whenever I will eat biryani, I will always remember him. He was so gentle and so humble," she said.
Shabana Azmi, who did the play Tumhari Amrita with Farooq Sheikh for 21 years, said the curtain has fallen on the play.
"Parda gir gaya hai (The curtain has fallen). This was our last play which we performed together on December 14 in Agra. There will be no show without Farooq."
"My last interaction with Farooq was when we did our play on December 14. I said it's been 21 years and we should stop this play. And he said 'Why are you saying this? In fact, we will continue this play for the next 21 years'," Shabana Azmi said.
Other Bollywood celebrities who attended the funeral included Javed Akhtar, Tabu, Farhan and Adhuna Akhtar, Shekhar Suman, Zoya Akhtar, Swara Bhaskar, Ila Arun, Rahul Bose and Sarikaa.
Farooq Sheikh is survived by his wife and two daughters.