Bollywood Gears Up For Glitzy IIFA Weekend in Kuala Lumpur 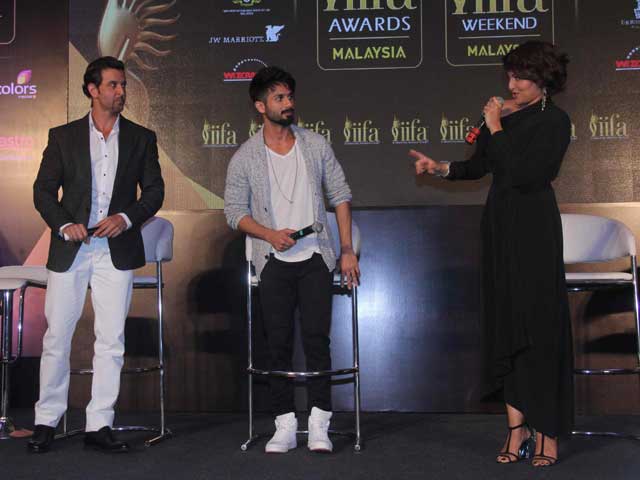 Hrithik Roshan, Shahid Kapoor and Sonakshi at the IIFA Awards press conference in Mumbai on May 28

The Bollywood stars who will light up the stage at the Stadium Putra here on the awards night on June 7 include, Hrithik Roshan, Anushka Sharma, Priyanka Chopra, Farhan Akhtar, Parineeti Chopra, Shraddha Kapoor, Sonakshi Sinha and Shahid Kapoor

There will be the glitz, glamour and the business of Bollywood at the forthcoming edition of the three-day International Indian Film Academy (IIFA) Weekend and Awards from June 5. It promises to be 'larger than life' with a focus on commercial opportunities between host country Malaysia and India.
The Bollywood stars who will light up the stage at the Stadium Putra here on the awards night on June 7 include, Hrithik Roshan, Anushka Sharma, Priyanka Chopra, Farhan Akhtar, Parineeti Chopra, Shraddha Kapoor, Sonakshi Sinha and Shahid Kapoor.
"This edition is coming of age. It will be larger than life. There is also growing support of film industries from international countries for the IIFA movement and that's important," Sabbas Joseph, director, Wizcraft International Entertainment, the organisers of IIFA, told IANS.
"We will be promoting Malaysia in a big way. There will be exciting opportunities for tourism. Trade and business opportunities between Malaysia and India are definitely focus for us. Later in the year, the ASEAN Summit will take place (in Malaysia) too; so it is a great building ground for that," he added.
Sonakshi, who will be soon seen as a judge on singing reality show Indian Idol Junior, will also display her singing skills at the IIFA Rocks event on June 5. "There will be some exciting first-ever too at the IIFA Weekend and Awards. Sonakshi is going to take the stage as a singer at IIFA Rocks," he said.
Excited about the hosts - the crackling duo of actors Ranveer Singh and Arjun Kapoor, Mr Joseph said,"You can imagine the madness, magic and mischief."
Another highlight will be the screening of Dil Dhadakne Do.
"The complete star cast will be in attendance. They will interact with fans and people from the film industry," said Mr Joseph, about the Zoya Akhtar-directed film, starring Anil Kapoor, Ranveer, Priyanka Chopra, Farhan Akhtar and Anushka Sharma.
There will also be a dose of fashion at the Fashion Extravaganza on June 6. Hosted by actors Vivek Oberoi and Neha Dhupia, the event will see quirky designs by Masaba Gupta, who will present a line inspired by the IIFA trophy.
"We've got Fashion Extravaganza featuring Rocky S, Masaba and Gaurang Shah. There will be different kinds of collections from each of them. Masaba is doing a special collection for IIFA. It is inspired by the trophy, the gold and black. It has the sun graphics also because the IIFA trophy is inspired by the sun," Mr Joseph revealed.
After travelling to London, Dubai, Macau, Toronto and Singapore, the IIFA extravaganza, which celebrates Indian cinema annually abroad, is heading to Malaysia for the second time for its 16th edition. Established in 2000, the gala was held at Genting Highlands Resort, Malaysia, in 2002 and, if one goes by the buzz, this edition will attract a whole lot of Bollywood fans.
IIFA has seen Hollywood stars like Angelina Jolie, Jackie Chan, Kevin Spacey and John Travolta gracing the gala in its various editions. But news of foreign talent this year has been kept under wraps so far.
Hosted by actors Ayushmann Khurrana and Parineeti Chopra, IIFA Rocks, an exclusive music extravaganza, will see a host of musical performances by Shankar-Ehsaan-Loy, Mika, Ankit Tiwari, Kanika Kapoor, Javed Ali and the Nooran sisters.
Writer-filmmaker Subhash Ghai, director of movies such as Karz, Hero, Karma, Saudagar, Khalnayak, Pardes and Taal, will be honoured with the lifetime achievement award.
With about 800 Indian delegates, consisting of business officials, people from the film industry, dancers and models, flying to Kuala Lumpur for IIFA, Mr Joseph promises that the event will offer "different dances, style and more".