Bollywood overdoes the bling at Cannes Sonam Kapoor, Vidya Balan and Aishwarya Rai Bachchan have all been criticised for their fashion choices at Cannes

Indian stars went a little overboard in projecting the ethnic, oriental look at the Cannes red carpet that saw Sonam Kapoor, Vidya Balan and Sherlyn Chopra either going big on bling or heavy on jewellery and embroidery.

Just when will Bollywood ever get it right? As the world celebrates 100 years of Indian cinema, Indian stars, it seems, went a little overboard in projecting the ethnic, oriental look at the Cannes red carpet that saw Sonam Kapoor, Vidya Balan and Sherlyn Chopra either going big on bling or heavy on jewellery and embroidery.
Aishwarya Rai, who has been a regular at Cannes for 11 years, didn't go for the Indian look but was panned for her choice of clothes and hair. 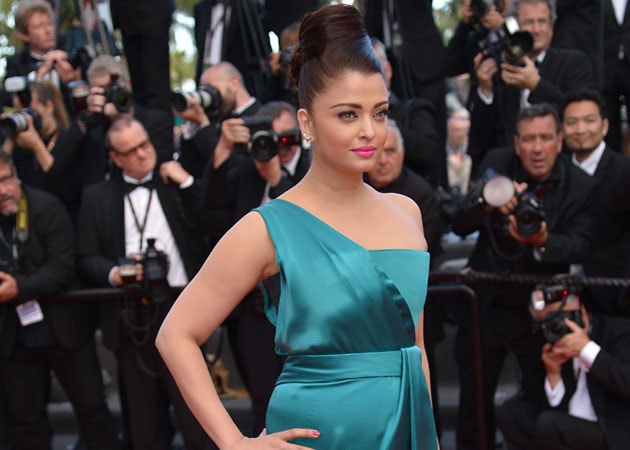 Ash ruined her look ruined the look with a severe, sculptural hairdo which was much too harsh for her face.
The display seemed surprising, considering that well-known designers like Sabyasachi Mukherjee, Anamika Khanna and Abu Jani-Sandeep Khosla were helping the stars put their best foot forward at the Cannes International Film Festival, which began May 15 and ends on May 26.
Vidya was part of the jury at the Cannes extravaganza, where India was the guest country this year. Rubbing shoulders with the likes of Ang Lee, Christopher Waltz and Nicole Kidman at the gala, Vidya looked sophisticated in a maroon and black lehenga-choli, but thereafter, her fashion choices only earned her brickbats.
If one day she wore an elaborate nose ring, on another she chose an ivory ensemble complete with a white dupatta on her head, prompting women back home to ask just what image of India she wanted to project. 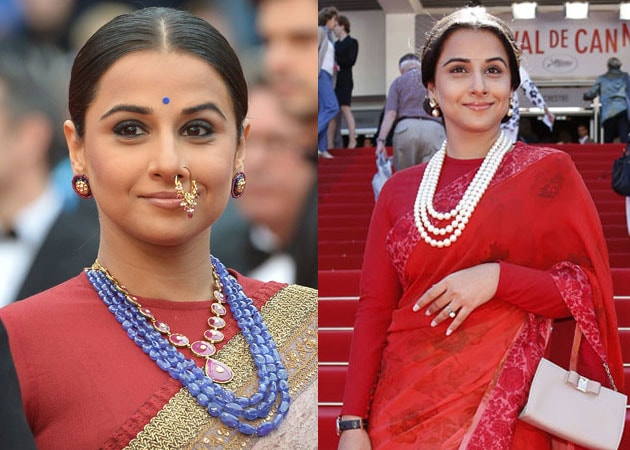 Vidya failed to impress at Cannes

Mukherjee said the idea was to dress her in "little embellishments" and to give her "a purist ethnic" look.
Even though the traditional suits Vidya, most of her looks at Cannes, barring one - a simple brown sari with a maroon blouse - failed to impress, say stylists.
"Vidya played safe by going traditional as it has always worked for her. What she had picked up was really good but badly styled. The choice of nose ring and the use of dupatta on the head were not required," said fashion stylist Shane Lonen, who has worked with actresses like Sonakshi Sinha, Karisma Kapoor and Prachi Desai.
Another actress, Sonam, considered a fashion diva back home, seemed to have gone overboard too - be it with her stylised sari teamed with a full-sleeved jacket, oversized nose ring or bold eye makeup. She made it up later with a voluminous floral Dolce and Gabbana off-shoulder gown. 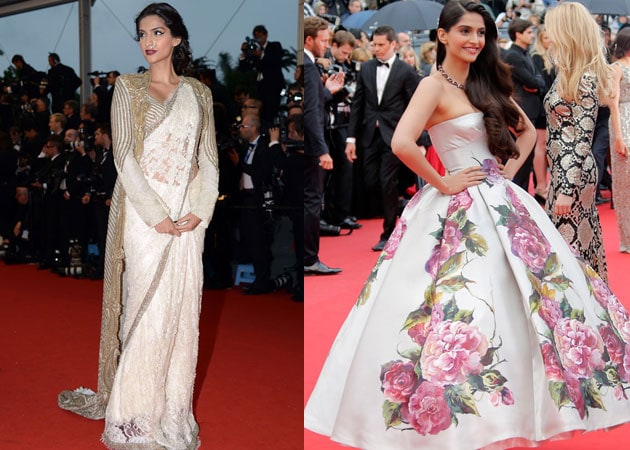 "Sonam has mostly been a delight to watch in all appearances, but not in Cannes. She went overboard with her efforts to keep her style quotient unique and high. Had she worn the sari as a standalone, minus her eye makeup and over-indigenous nose ring, she would have been endearing enough," fashion stylist Saachi Vijaywargia told IANS.
Aishwarya, said Cannes watchers, has improved in her choice of red carpet ensembles over the years. This year she played it safe with either black or a heavily embellished full-sleeved multi-pastel coloured ensemble by Abu Jani-Sandeep Khosla, but she could have done with some more colour. Ash received a lot of flak for her Abu Jani-Sandeep Khosla number.

"I definitely think a dash of colour would've been nice for Aishwarya's look," said fashion stylist Nikita Rijhsinghani. The actress slipped into a metallic blue gown one day, but she didn't leave a black clutch behind.
Some of India's past representatives at Cannes have been subtle and simple in their fashion picks. Nandita Das and Sharmila Tagore before her have managed to turn heads with their simple, elegant saris and classic pieces of jewellery, also representing the country's ethnic tradition very well.
Designer Amit GT feels black and white are "outdated" colours, but they were a hit with the Indian actors this year. Kamasutra 3D actress Sherlyn Chopra went for a daring transparent black ensemble, and Mallika Sherawat opted for a black gown on one day of the event.
Rijhsinghani gave a thumbs down to Sherlyn, and said: "There are a million and one looks to look sensuous! Kill the transparency for starters! Sherlyn just needs to hire a stylist with better sensibilities and may be get a new mirror too."
Sensuous can mean more than just showing skin, says Lonen.
"Sensuous and sexy don't mean going out and revealing your skin. With the kind of body she has, she can easily pull out a look like that, or even a classy Dior gown with good eye makeup would do justice," he said.
Mallika also went all wrong with her blingy gold dress, says Amit GT, who felt the look was "most cringeworthy".