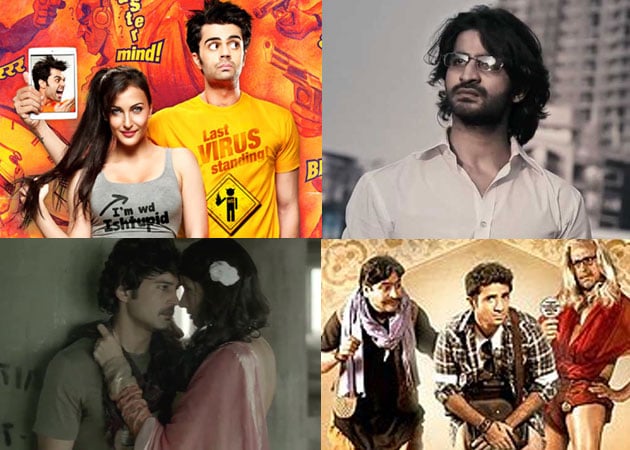 A bouquet of seven films will try to grab eyeballs this weekend.

With one-week window for them before next week's big release Krrish 3, small releases and debutants are squeezing in to woo the box office as well as the moviegoers.

With one-week window for them before next week's big release Krrish 3, small releases and debutants are squeezing in to woo the box office as well as the moviegoers.
A bouquet of seven films, including comedy-thriller Mickey Virus, romantic drama Ishq Actually, family entertainer Sooper Se Ooper and crime saga Satya 2 will try to grab eye balls this weekend.
"The situation arose because there is no other date available in November for these films to release. The festive season has so many big films coming that there is no other time. Once you make a film, how long can you wait before you release it," trade analyst Taran Adarsh said.
The weekend will mark both acting and directorial debuts of many.
For instance, Mickey Virus will mark the debut of actors Manish Paul and Elli Avram in Bollywood and it is also Saurabh Varma's first movie.
The comedy-thriller has been made on a budget of Rs.11 crore, which includes publicity and advertising, and it will release in 1,000 screens. Chances are that the film will be remade in Tamil and Telugu.
Ram Gopal Verma's Satya 2 will see debutant actor Puneet Singh in the lead role of a corporate gangster. The film also marks the debut of Anaika Soti and Aradhna.
A low budget film, Satya 2, said to be Verma's last gangster film, will see a nation-wide release.
Another director who will foray into filmdom is Shekhar Ghosh with Sooper Se Ooper. Starring comedy actor Vir Das in the lead, it will be presented by Reliance Entertainment and is produced by Jigsaw Pictures.
It has been shot in Rajasthan as well as Mumbai and also stars Gulshan Grover, Deepak Dobriyal, Kirti Kulhari and Yashpal Sharma.
These may be small budgets movies, but they will vie for their individual spot at the box office, said trade analyst Komal Nahta.
"Each one of these films will be viewed according to the entertainment they offer. In fact, they have nothing to do with how the previous big release Boss is doing," said Nahta.
The other releases of the week include Wake Up India, which has been produced under Kanishka Films and Shree Balajee Entertainment. Directed by Babloo Seshadri, the film stars Manoj Joshi, Aanjjan Srivastav and Mukesh Tiwari.
Director Anish Khanna's Ishq Actually will bring Rajeev Khandelwal on the big screen once again. He has teamed up with Rayo Bakhirta, Neha Ahuja, Neha Ghelot and Siddharth Van Shipley in the movie.
Then there is Bull Bulbul Bandook, a crime drama directed by Karan Butani. The film stars Jimmy Sheirgill, Shriya Saran and Jackie Shroff.
Nextgen Enterainment's Amdavad Junction will also hit screens this week. It is an action drama that stars Rohan Jardosh, Saurabh Singh and Gunjan Vyas and has been directed by Apurv Bajpai.
While these will have just a week to prove their mettle, Rakesh Roshan's Krrish 3 will get two weeks before the next big release Ram-Leela on November 15.
"This is normal. Whenever a big film comes, there is always a gap," Adarsh added.