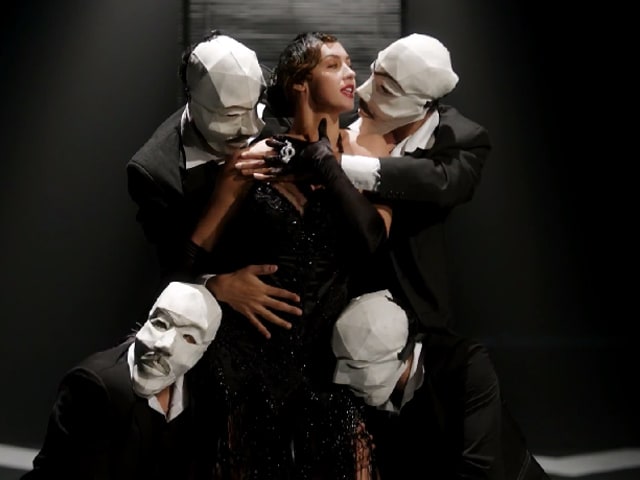 Lauren Gottlieb in a still from Calcutta Kiss

Lauren, winner of international dance reality show So You Think You Can Dance, features in the video as a '60s cabaret dancer surrounded by mime artists dressed like Byomkesh Bakshy in dhotis and jackets. The video also features snippets from the film to pique curiosity. Lauren choreographed Sushant's moves in Bach Ke Bakshy. (Also Read: From Sushant Singh Rajput to Detective Byomkesh Bakshy in a Rap Song)

Musically, Calcutta Kiss is the creation of funk duo Madboy/Mink, who are otherwise known as actors-singers-composers Imaad Shah and Saba Azad.

The title of the song presumably refers to the kiss between Sushant's character and that of the actress-spy played by Swastika Mukherjee. Sushant was 'tricked' into the kissing scene by director Dibakar Banerjee and, according to Swastika, was left 'in shock' by it. (Also Read: Swastika Mukherjee Says Sushant Was 'in Shock' After Byomkesh Bakshy Kiss)

The film, which is the latest in a series of cinematic renditions of Bengali author Sharadindu Bandopadhyay's detective series, also stars Anand Tiwari, Divya Menon, Meiyang Chang and Neeraj Kabi. Detective Byomkesh Bakshy! is scheduled to release on April 3.