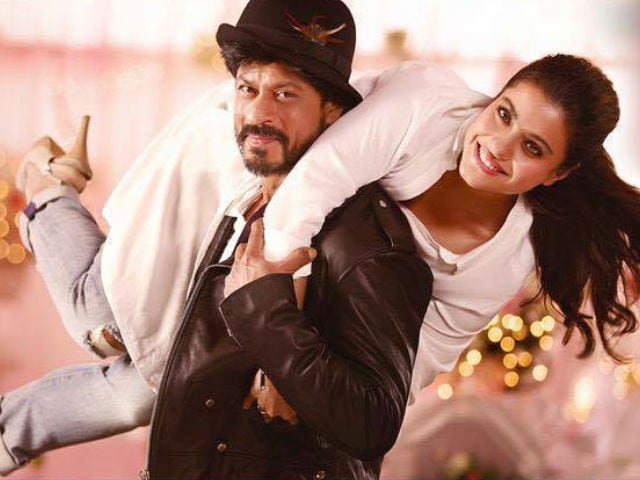 "When we started the film (DDLJ) in 1990s, there was this concept of golden jubilee, silver jubilee and platinum jubilee. Now the function has changed and that era is over. Unfortunately, nowadays we talk about two weeks only," said Shah Rukh Khan. Dilwale also stars Kajol and slated to release on December 18

Year 2015 has marked two decades since the iconic Bollywood romantic film Dilwale Dulhania Le Jayenge released. The film, starring Shah Rukh Khan and Kajol, is still being screened Mumbai's Maratha Mandir.
But Shah Rukh, who holds the film close to his heart, said that there are better films (than DDLJ) that were made and will be made.
"There are better films that were made and will be made than DDLJ. Yes, realistically and practically speaking, maybe there won't be any films that will run for 20 years now because of strong digital world, but it's not that there will be no films better than DDLJ," the 49-year-old actor told IANS. (Also Read: Dilwale King and Queen, Shah Rukh and Kajol, in a New Pic)
"I am sure there will be 100 films better because all of us (actors and filmmakers) would try to give better than the best with every film," Shah Rukh said on the sidelines of the shooting of his upcoming film Dilwale.
The team has been shooting the last leg of the film in Hyderabad for a month.
Directed by Rohit Shetty and co-produced by Red Chillies Entertainment, Dilwale marks Shah Rukh and Kajol's reunion after 2010 film My Name is Khan. It's a treat for fans who love their onscreen chemistry, which has in the past come alive in films like Baazigar, Kabhi Khushi Kabhie Gham and Karan Arjun.
A 20-minute video footage Dilwale was screened for media persons at the Ramopji Film City. It featured the song sequence shot in Iceland, recreating SRK and Kajol magic; an action sequence with SRK; a few comical scenes involving Johnny Lever, Sushir Mishra and Varun Sharma; and even scenes and songs featuring Varun and Kriti Sanon. (Also Read: Dilwale Looks Really Nice, Says Shah Rukh Khan)
Of Dilwale's potential to repeat the magic of 20-year long run of Dilwale Dulhaniya Le Jayenge, SRK said: "I don't think (so), as time has changed. When we started the film (DDLJ) in 1990s, there was this concept of golden jubilee, silver jubilee and platinum jubilee. Now the function has changed and that era is over. I think audience is more accessible now and also the number of theatres are more. Unfortunately, nowadays we talk about two weeks only," he said. (Also Read: What Happened When a Hungover Shah Rukh Khan Asked Kajol to 'Shut Up'?)
Citing examples of Aamir Khan's PK, Salman's Bajrangi Bhaijaan and S S Rajamouli's Baahubali, he said: "There were 150 theatres in the past and now the number has increased to over 40,000. As many as 11 to 12 crore people watch big films like PK, Bajrangi Bhaijaan and Baahubali. Also, it's nothing to do with numbers, but accessibility."