Can You Guess Who Shah Rukh Khan is With in This Spiderman Video?

Well, we don't mind a black Spiderman as long as he is as cute as Shah Rukh's youngest son, 3-year-old AbRam 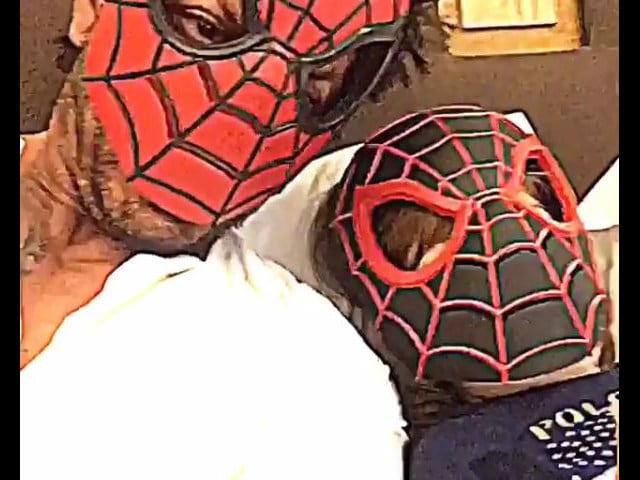 A still from the video Instagrammed by iamsrk .

Shah Rukh Khan, stop. You are killing us now.
By the way, you remember when Spiderman turned evil right? And oh, how we all let a sigh of relief when he was back to being his good old self.
Well, we don't mind a black Spiderman as long as he is as cute as Shah Rukh's youngest son, 3-year-old AbRam.
On Sunday, Shah Rukh, who has been forbidden from sharing AbRam's pictures on social media by his family, broke the rule yet again, went a step ahead and instagrammed a video of himself and AbRam, in which both play parts in explaining the importance of good and evil.
Sorry, Shah Rukh, but we must be honest. An 'unbeatable' AbRam steals the show.
*Web-shot alert times two*

AbRam has been the subject of many of SRK's posts:


Well a father also feels the first kick of the baby, albeit differently....Ouch!!!

Birthday celebrations 30,000 ft from the ground. The chips r here now waiting for the colas & cake.

Rule-breaker Shah Rukh introduced AbRam with this picture on Instagram:


I am forbidden by family to post their pics on the net but sometimes all u need is some balls to tread the forbidden...

Meanwhile, Shah Rukh is busy filming the Imtiaz Ali movie, which also co-stars Anushka Sharma. This is what happened when SRK tried teaching Hindi to the Assistant Director from the sets.


Jurriaan our first AD learning how to do pappad & me the countdown. #hindidutchbhaibhai

The working title of Imtiaz's film is The Ring. Shah Rukh shared posts from Amsterdam and Prague.


"I am...like the Truth. Loving me is easy, if you see it for what it is. Terribly difficult if you want it to be what it isn't."

Earth without 'art' is just 'Eh'. Read this on a wall and was inspired to requote it against a wall of my own...

Shah Rukh Khan, 50, will next be seen in Dear Zindagi, co-starring Alia Bhatt. It is Gauri Shinde's second movie after the critically acclaimed film English Vinglish, starring Sridevi. It releases on November 25.
Last seen in Fan, SRK also stars in Raees which is scheduled to release on January 26, 2017.