Can You Spot Sonam Kapoor in This Jacqueline Fernandez Photoshoot? 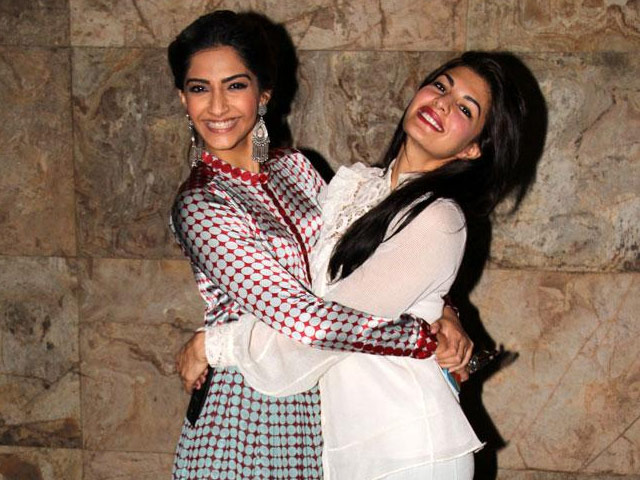 Sonam Kapoor and Jacqueline Fernandez photographed at an event in Mumbai.

"@sonamkapoor you made it into my @vogueindia feature!!" Jacqueline posted on Instagram

It began with Jacqueline Fernandez's 'dream' and, somehow, Sonam Kapoor found herself making a cameo appearance in it. The Brothers actress recently featured in a fashion magazine and in one of her pictures, she shared her thunder with fashion's favourite child.
Jacqueline shared the image on Instagram and wrote: "And it all began with a dream... @sonamkapoor you made it into my @vogueindia feature!!"
Can you spot Sonam in this pic?:


And it all began with a dream... @sonamkapoor you made it into my @vogueindia feature!!

No?
She's there in the pic held by Jacqueline.
Jacqueline looked uber-chic in a quirky look comprising of a faux-fur jacket and multi-coloured boots. She struck a pensive mood seated in a vintage car with the picture of Sonam (looking exuberant).
But Jacqueline seems to have no qualms about it as the actresses share a friendship that extends beyond social media sites. Recently, Jacqueline and Sonam looked quite at ease with each other while posing with filmmaker Karan Johar at Arjun Kapoor's birthday bash in Mumbai.

And before that too:

Jacqueline was also one of those close friends who visited Sonam when she was recuperating from H1N1 influenza:

And last year at an awards show, Sonam served as emergency stylist to Jacqueline:

So it's quite natural to see Sonam photobombing (of sorts) Jacqueline's feature!